Houlton is the county seat of Aroostook County, and as such its nickname is the "Shire Town". The Houlton High School sports teams are named "The Shiretowners". The Meduxnekeag River flows through the heart of the town, and the border with the Canadian province of New Brunswick is 3 mi (4.8 km) east of the town's center. Houlton was the home of Ricker College, which closed in 1978.

The primary settlement and center of the town is designated as a CDP with the same name. The headquarters of the federally recognized Houlton Band of Maliseet Indians is based here. 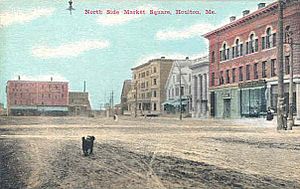 The area was occupied for thousands of years by varying cultures of indigenous peoples. In historic times, these were the Algonquian-speaking Maliseet people.

Decades after the American Revolutionary War, Anglo-American pioneers Aaron Putnam and Joseph Houlton started a village. They named it for Houlton, who had moved to Maine in 1807 from the more populated part of Massachusetts. Maine separated from Massachusetts in 1820 and became an independent state.

In 1828 the United States government established Hancock Barracks, a military post, in the area. Houlton officially incorporated as a town in 1831. When the Aroostook War flared in 1839 over the border with Canada, three companies of the 1st Artillery Regiment manned Hancock Barracks under Major R. M. Kirby. Major Kirby helped to restrain the twelve companies of militia that Maine sent there from starting a shooting war. The Webster-Ashburton Treaty settled the boundary dispute in 1842, and the Army abandoned Hancock Barracks in 1847.

The US Army established Houlton Army Air Base in 1941 immediately adjacent to the Canada–US border. Prior to the United States' entry into World War II, American army pilots flew planes to the base. They could not fly the planes directly into Canada, a member of the British Commonwealth, because that would violate the official United States position of neutrality. Local farmers used their tractors to tow the planes into Canada, where the Canadians closed the Woodstock highway so that aircraft could use it as a runway.

A Royal New Zealand Air Force pilot, officer George Newall Harrison, died on 5 December 1942 when he crashed 500 yards south of the runway while ferrying a Hudson Bomber to Britain. Survivors buried his body in the Evergreen Cemetery plot for veterans. Few other New Zealand casualties from World War II were buried in the United States of America. His 19-year-old radio operator, Sergeant Henry Bordewick, also died and was buried there; he was from Vancouver, British Columbia, Canada. The American Legion post in Houlton maintains both these Commonwealth War Graves.

Houlton Army Air Base closed in July 1944. In 1944, the Army adapted a major part of the Houlton Army Air Base for use as prisoner of war internment in Camp Houlton. At its peak, the internment camp held 3,700 German prisoners of war. Forcing prisoners of war to work violated the Geneva Convention; however, they could volunteer to work. Camp Houlton provided laborers for local farms to harvest peas, pick potatoes, and do other labor. For security reasons, the government did not allow every prisoner of war to work on the farms. Most prisoners selected to work did not want to harm their captors or cause trouble. Many farmers came to consider the prisoners of war who worked their fields as good laborers rather than enemy soldiers. They paid the prisoners $1/day in scrip, which the prisoners could spend at the post exchange, the base store, to buy toiletries, tobacco, chocolate, or beer. After the prisoners repatriated, the Army closed Camp Houlton in 1946. The site was redeveloped as Houlton International Airport. 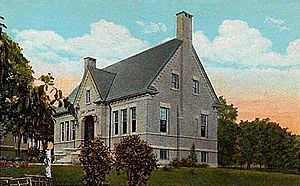 Interstate 95 has its northernmost two exits in Houlton. The Houlton/Woodstock Border Crossing, located to the east of downtown Houlton, marks the northern terminus of Interstate 95. The town is also crossed by U.S. Route 1 and U.S. Route 2, which have a brief concurrency in the center of town.

Typically for Maine, Houlton has a humid continental climate (Köppen Dfb) with cold and snowy winters typically featuring forty-six nights – comparable to Fargo – below 0 °F or −17.8 °C and eighty-three days failing to reach freezing, plus warm summers. The coldest month between 1971 and 2000 was January 1994 with a mean temperature of 0.7 °F or −17.4 °C, though data from nearby stations suggest the Januaries of 1920 and 1925 were equally cold. Snow depth typically reaches 14 inches or 0.36 metres in February, and has been as high as 71 inches or 1.80 metres at the close of January, 1998.

All content from Kiddle encyclopedia articles (including the article images and facts) can be freely used under Attribution-ShareAlike license, unless stated otherwise. Cite this article:
Houlton, Maine Facts for Kids. Kiddle Encyclopedia.