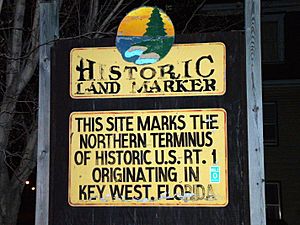 The monument marking the northern terminus of US Route 1

Fort Kent is a town in Aroostook County, Maine, United States, situated at the confluence of the Fish River and the Saint John River. The population was 4,067 in the 2020 census. Fort Kent is home to an Olympic biathlete training center, an annual CAN-AM dogsled race, and the Fort Kent Blockhouse, built in reaction to the Aroostook War and in modern times designated a national historic site. Principal industries include agriculture (particularly potatoes and forestry) and textiles. Fort Kent is the northern terminus of U.S. 1 and the ending point of the Northern Forest Canoe Trail.

Fort Kent was erected in the summer of 1839 as an American border outpost during the undeclared Aroostook War. The blockhouse, the first structure built in what is present-day city of Fort Kent, was named after then-governor of Maine Edward Kent. The Saint John River was a log driving route from upstream forests to downstream sawmills and paper mills until the Bangor and Aroostook Railroad and trucks began transporting pulpwood.

After receiving nearly 200 inches (510 cm) of snow during the 2007–2008 winter season, the Saint John River began to flood on April 29. Nearly two days of nonstop rain also contributed to the flooding. As the river rose, it poured into the downtown area. More than 600 of Fort Kent's 4,233 residents were evacuated. The river's water level rose to nearly 31 feet (9.4 m), which was 6 feet (1.8 m) above flood stage.

Governor John Baldacci declared a state of emergency for the region, flying from Augusta to see the damage first-hand. The Fish River did most of the damage, flooding St. Louis Catholic church and an apartment building.

The town is economically and culturally linked to the Canadian towns of Clair and Saint-François-de-Madawaska, both in Madawaska County, New Brunswick, directly across the Saint John River. Most children on the Canadian side attend French-speaking school while their American counterparts are taught mainly in English.

Sixty-two percent of the residents of Fort Kent are habitual speakers of French. The variety of French spoken in Fort Kent and most of the Saint John River Valley closely resembles the French spoken in Quebec and New Brunswick. It is referred to as "Valley French" or "Brayon". Many residents also have American-Canadian dual citizenship.

There were 1,747 households, of which 25.8% had children under the age of 18 living with them, 49.5% were married couples living together, 8.0% had a female householder with no husband present, 3.4% had a male householder with no wife present, and 39.2% were non-families. 31.4% of all households were made up of individuals, and 13.6% had someone living alone who was 65 years of age or older. The average household size was 2.23 and the average family size was 2.83.

Fort Kent is home to the International Muskie Fishing Derby. The Derby was started in 2003 to provide a platform showcase the new fishery and continues today. It has brought attention to the new fishery and helped bring attention to national TV shows such as ESPN 2's Beat Charlie Moore. This show and other future shows will help show case the fishery to not only potential derby contestants but for a more secure and expanded tourist based fishery. The St John Watershed is a unique muskie habitat. Several factors make it acceptable and necessary to remove some fish from the ecosystem for the fishery to remain healthy.

Along with the Muskie Derby is the Fort Kent Ploye Festival, one of the featured events is the making of the world's largest ploye. This event attracts hundreds of spectators, making it the highlight of the Ploye Festival. The massive ploye, which thus far, measures 12 feet in diameter, can only be accomplished with the help of friends and family of Bouchard Family Farm, producers or the ploye mix. It requires approximately fifteen bags of charcoal to ready the metal pan to the accurate temperature in order for the ploye to be cooked to perfection. It also needs about fifty pounds of ploye mix, much water (which is then mixed in five-gallon pails) and plenty of muscle to stir the mix. Five people are required to transport the mix from the pails to the awaiting pre-heated pan and also four people to spread the mix out as fast as possible. The thin batter cooks quickly, so time is of the essence. Once cooked, the enormous pan is then removed from the coals, and the ploye is taken off with huge spatulas. Pieces of the giant ploye are then plopped onto large trays and brought to nearby tables where they can be buttered with brushes, and distributed to the eagerly awaiting crowd.

Northern Maine and parts of New Brunswick and Quebec participated in the World Acadian Congress to celebrate the rich Acadians history of the area in 2014. Multiple family reunions and events took place during the time, including concerts, parades, and festivals.

The Can-Am Crown International Sled Dog Race was first held on Tuesday, February 16, 1993. Nine teams from Maine, Ontario, Quebec, and New Brunswick competed in that race. In 1994 sixteen teams competed in the 250-mile race and eleven in the newly introduced 60-mile race. In 1997 a 30-mile race was added to the itinerary. That same year, the first Saturday in March was established as the official start date for all three races. The race begins on Main Street in Fort Kent, sloping underneath the international bridge to Canada, then extending into the western parts of the Allagash wilderness, and finishes back in Fort Kent. Three races are part of the CAN-AM Crown, consisting of a 30-mile, 60 mile, and an Iditarod Trail Sled Dog Race qualifying 250 mile race.

The town is home to the campus of the University of Maine at Fort Kent.

Fort Kent signed a lease agreement with the Fish River Flying Club on July 8, 2011 to repair, maintain, and operate the local municipal airport, which had been closed since the 1980s.

All content from Kiddle encyclopedia articles (including the article images and facts) can be freely used under Attribution-ShareAlike license, unless stated otherwise. Cite this article:
Fort Kent, Maine Facts for Kids. Kiddle Encyclopedia.