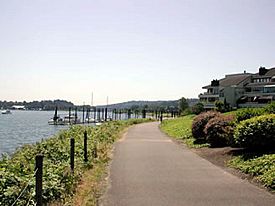 South Portland is a long narrow neighborhood just south of Downtown Portland, Oregon, hemmed in between the Willamette River and the West Hills. It stretches from I-405 and the Marquam Bridge on the north, to SW Canby St. and the Sellwood Bridge in the south. The Willamette forms the eastern boundary, and SW Barbur Blvd. most of the western boundary. In addition to Downtown to the north, other bordering neighborhoods are Southwest Hills, Homestead, Hillsdale, and South Burlingame to the west, and Hosford-Abernethy, Brooklyn, and Sellwood-Moreland across the river on the east.

The neighborhood, formerly known as Corbett-Terwilliger-Lair Hill or CTLH, changed its name at a meeting of its neighborhood association on September 6, 2006 to be more concise and inclusive. South Portland was the name of a 19th-century community that overlapped the present day neighborhood.

The neighborhood is a collection of very different areas.

All content from Kiddle encyclopedia articles (including the article images and facts) can be freely used under Attribution-ShareAlike license, unless stated otherwise. Cite this article:
South Portland, Portland, Oregon Facts for Kids. Kiddle Encyclopedia.