Kids Encyclopedia Facts
Not to be confused with Fort George (Castine, Maine).

Fort Gorges is a former United States military fort built on Hog Island Ledge in Casco Bay, Maine. Built from 1858 to 1864, no battles were fought there and no troops were stationed there. Advancing military technology, including iron clad ships and long range guns, made the fort obsolete before it could be used. The fort is now a park, accessible only by boat. It was added to the National Register of Historic Places in 1973. 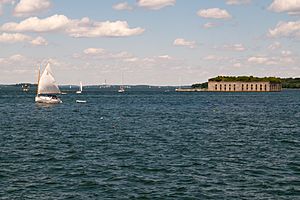 Following the War of 1812, the United States Army Corps of Engineers proposed that a fort be built on Hog Island Ledge, in Casco Bay at the entrance to the harbor at Portland, Maine. It was part of the third system of US fortifications. Named for the colonial proprietor of Maine, Sir Ferdinando Gorges, it was constructed to support existing forts, including Fort Preble in South Portland and Fort Scammel built on nearby House Island in 1808. Congress, however, did not fund construction of Fort Gorges until 1857. The walls of the fort were begun the next year, and when the American Civil War broke out in 1861, work quickly advanced.

The fort was designed by Colonel Reuben Staples Smart. The chief architect in charge of construction was Thomas Lincoln Casey, who later became Chief of Engineers. It is similar in size and construction to Fort Sumter, but is built of granite instead of brick.

The Fort's armament consisted of thirty-four 10-inch Rodman guns mounted in the fort's casemates. In 1898, all guns were removed from the fort except a large 300-pounder (10 in (254 mm)) Parrott rifle which was on the top of the fort but not mounted. The 300-pounder Parrott rifle still remains in place and is one of the largest surviving specimens of Civil War vintage artillery.

The fort was last used by the Army during World War II, when it was used to store submarine mines.

It was acquired by the city of Portland in 1960 and placed on the National Register of Historic Places in 1973. It is now open to the public as a park, and is accessible only by private boat or hired water taxi. Visitors are recommended to carry a flashlight to enter the powder magazines. The fort is in need of restoration.

Friends of Fort Gorges initiated a $250,000 fundraising campaign for money to make critical repairs to the facility in the Summer of 2019. Portland developer Mike Dugay has proposed converting the location into a commercial space to include a bed and breakfast, restaurant, and brewery.

All content from Kiddle encyclopedia articles (including the article images and facts) can be freely used under Attribution-ShareAlike license, unless stated otherwise. Cite this article:
Fort Gorges Facts for Kids. Kiddle Encyclopedia.