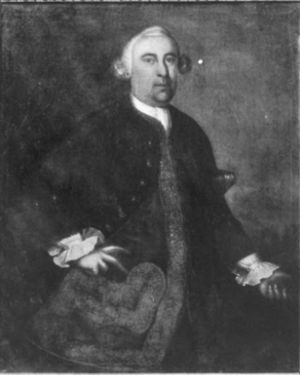 Fort George was a British colonial fort, erected in 1715 - 1737, that was located in Pejepscot (Brunswick), when Maine was under jurisdiction of the Province of Massachusetts Bay.

During King Philip's War in 1676, Wabanakis destroyed a trading post which sat beside the Androscoggin River's Pejepscot Falls. In 1688, Governor Edmund Andros built a fort in view of the falls during King William's War to prevent Wabanakis from fishing or portaging their canoes at the site. This fort was abandoned and destroyed the next year in the upheaval surrounding the Glorious Revolution in New England During the war, in Major Benjamin Church's second expedition, he arrived on 11 September 1690 with 300 men at Casco Bay. He went up the Androscoggin River to the English Fort Pejepscot (present day Brunswick, Maine). From there he went 40 miles up-river and attacked a native village. Three or four native men were shot in retreat; when Church discovered 5 English captives in the wigwams, six or seven prisoners were butchered as an example; and nine prisoners were taken. A few days later, in retaliation, the natives attacked Church at Cape Elizabeth on Purpooduc Point, killing 7 of his men and wounding 24 others.

After Queen Anne's War, Fort George was built in 1715 by Captain John Gyles in Brunswick. The fort was 3 feet (0.91 m) underground with a 3-foot-thick (0.91 m) wall base, standing at least 10 feet (3.0 m) high above ground, laid with lime mortar. The barracks housed fifteen men. A large two-story dwelling house, appearing above the walls, made living possible. The range of its cannon protected the dwellings within their reach.

During Father Rale's War, the inhabitants of Brunswick were hospitably gathered within the refuge. Many times this hospitality was strained to its most generous capacity as the onslaughts of Indian attacks were incessant. The most significant attack was when the fort was under siege during the early days of Father Rale's War (1722). 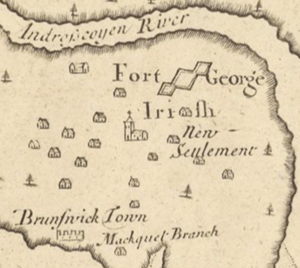 In 1725, Captain William Woodside took command of the fort and Gyles was sent to Fort St. George (Thomaston, Maine). In 1730, Rev. Benjamin Kent became the minister.

In 1736, the Great and General Court of Massachusetts decided to dismantle Fort George, which would ultimately leave the town vulnerable to Indian attacks. An earnest supplication, from the people, was sent to Gov. Jonathan Belcher of Massachusetts, begging to have the fort remain. A petition was then signed by twenty Brunswick families and twenty Topsham families, at the Brunswick meeting house on April 25, 1737. All to no avail, the state legislature was deaf to the appeal and proceeded to have the fort dismantled. The order was effective immediately, and the property was to revert to the proprietors.

During the French and Indian War, at a meeting of the Penobscot proprietors held October 8, 1761, a deed was executed to split the land between Jeremiah Moulton and Captain David Dunning. On November 19, 1761, a written order was given to surrender the fort and buildings to either Moulton or Dunning according to the Penobscot Papers.

The ruins of this historical fort were standing until 1802.

All content from Kiddle encyclopedia articles (including the article images and facts) can be freely used under Attribution-ShareAlike license, unless stated otherwise. Cite this article:
Fort George (Brunswick, Maine) Facts for Kids. Kiddle Encyclopedia.