Bethel is a town in Oxford County, Maine, United States. The population was 2,607 at the 2010 census. It includes the villages of West Bethel and South Bethel. The town is home to Gould Academy, a private preparatory school, and is near the Sunday River ski resort. 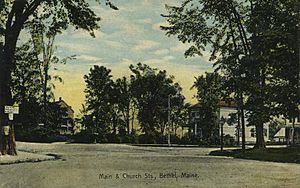 Main and Church streets in 1913

An Abenaki Indian village was once located on the north side of the Androscoggin River, but had been abandoned before its subsequent English settlement. In 1769, the township was granted as Sudbury-Canada by the Massachusetts General Court to Josiah Richardson of Sudbury, Massachusetts and others (or their heirs) for services at the Battle of Quebec in 1690. It was first settled in 1774 when Nathaniel Segar of Newton, Massachusetts started clearing the land.

The Revolutionary War, however, delayed many grantees from taking up their claims. Only 10 families resided at Sudbury-Canada when it was plundered on August 3, 1781 during the last Indian attack in Maine. Two inhabitants, Benjamin Clark and Nathaniel Segar, were abducted and held captive in Quebec until the war's conclusion, after which the community grew rapidly. On June 10, 1796, Sudbury-Canada Plantation was incorporated as Bethel, the name taken from the Book of Genesis and meaning "House of God."

In 1802, a trade road (now Route 26) was completed from Portland to Errol, New Hampshire, passing through Bethel and bringing growth. More settlers and businesses arrived. Crops were planted on fertile intervales and meadows formerly cultivated by Indians. Bethel became one of the best farming towns in the state, especially for hay and potatoes. In winter, farmers found work logging, with the lumber cut at sawmills operated by water power from streams. Other manufacturers produced flour, leather and harnesses, furniture, boots and shoes, carriages, and marble and granite work. The Bethel House, a large hotel, was built in 1833.

On March 10, 1851, the Atlantic and St. Lawrence Railroad opened to Bethel, carrying freight and summer tourists eager to escape the noise, heat and pollution of cities. Between the Civil War and World War I, Bethel was a fashionable summer resort. Several hotels were built facing the common or on Bethel Hill. Begun in 1863, The Prospect Hotel was the largest, with a cupola from which guests could observe the mountains. Tally-ho coaches provided tours through wilderness landscapes of the White Mountains and Maine. Dr. John G. Gehring's famed clinic for nervous disorders attracted many wealthy patients. Between 1897 and 1926, important figures in the music world performed at the Maine Music Festivals organized by William Rogers Chapman. But with the advent of the automobile, tourists were no longer restricted by the limits of train service, but were free to explore. Consequently, many big hotels built near the tracks lost patrons, declined and were eventually torn down. The Prospect Hotel was largely destroyed by fire in 1911. The National Training Laboratories was established at Bethel by psychologist Kurt Lewin in 1947, but its headquarters moved to Alexandria, Virginia in 2005. Nevertheless, the town remains popular with tourists for its beautiful natural setting and historic charm. 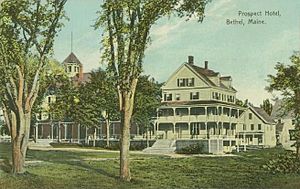 The Prospect Hotel, largest in Bethel, as it appeared in 1909

There were 1,121 households of which 29.7% had children under the age of 18 living with them, 47.6% were married couples living together, 9.5% had a female householder with no husband present, 5.9% had a male householder with no wife present, and 36.9% were non-families. 29.1% of all households were made up of individuals and 13.2% had someone living alone who was 65 years of age or older. The average household size was 2.33 and the average family size was 2.83.

There were 1,034 households out of which 27.3% had children under the age of 18 living with them, 52.5% were married couples living together, 9.4% had a female householder with no husband present, and 34.5% were non-families. 26.9% of all households were made up of individuals and 10.0% had someone living alone who was 65 years of age or older. The average household size was 2.33 and the average family size was 2.77. 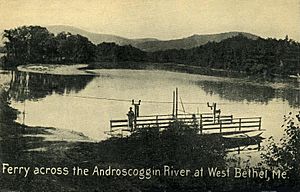 Ferry across the Androscoggin River at West Bethel in 1909

All content from Kiddle encyclopedia articles (including the article images and facts) can be freely used under Attribution-ShareAlike license, unless stated otherwise. Cite this article:
Bethel, Maine Facts for Kids. Kiddle Encyclopedia.