Kurt Lewin (September 9, 1890 – February 12, 1947) was a German-American psychologist, known as one of the modern pioneers of social, organizational, and applied psychology in the United States. Exiled from the land of his birth, Lewin ( lə-VEEN) made a new life for himself, in which he defined himself and his contributions within three lenses of analysis: applied research, action research, and group communication were his major offerings to the field of communication.

Lewin is often recognized as the "founder of social psychology" and was one of the first to study group dynamics and organizational development. A Review of General Psychology survey, published in 2002, ranked Lewin as the 18th-most cited psychologist of the 20th century. 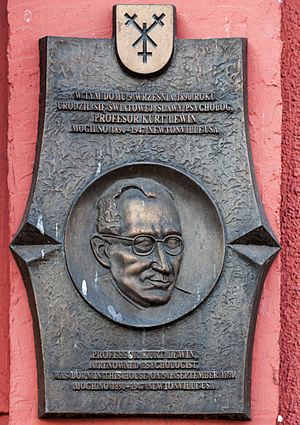 All content from Kiddle encyclopedia articles (including the article images and facts) can be freely used under Attribution-ShareAlike license, unless stated otherwise. Cite this article:
Kurt Lewin Facts for Kids. Kiddle Encyclopedia.