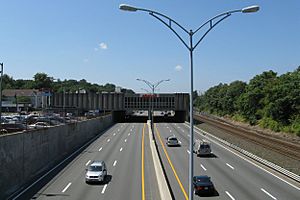 Mass Turnpike at Newtonville, showing supermarket with early use of air rights

Newtonville is one of the thirteen villages within the city of Newton in Middlesex County, Massachusetts, United States.

Newtonville is a predominantly residential neighborhood. It is divided into two parts by the Massachusetts Turnpike and the MBTA Commuter Rail, which runs through it below grade, so that there are several bridges over the turnpike. The Star Market on Austin Street (currently Shaw's) was one of the first projects in the country to buy air rights for construction; the supermarket is built over the Massachusetts Turnpike.

Newtonville was once served by the now defunct Newton Nexus bus, a free service provided by the city of Newton. Walnut Street is the main street of the village. The urban section of the road is home to restaurants, bakeries, and cafes, several banks, multiple fitness centers, and dry cleaners. Branching off of Walnut is the Austin Street commercial area, which sports a Starbucks, restaurants, a toy store and the air rights supermarket entrance.

On the north side of the turnpike, on Washington Street (which runs parallel to the Massachusetts Turnpike) there are many more restaurants, hair salons, barber shops, nail salons, liquor stores, Newton's largest Post Office, and a Whole Foods supermarket.

Located in Newtonville is Newton North High School, one of the city's two high schools.

A mixed-use development known as Washington Place is nearing completion on the corner of Walnut and Washington Street in Newtonville's center. It brings 140 new residential units, 35 of which are affordable housing, 43,860 square feet of office space, and extra parking for nearby businesses and residents. The project is being developed by Mark Development.

Newtonville is bisected by the Massachusetts Turnpike, connecting it to neighboring villages in Newton and downtown Boston.

The village is served by the MBTA Commuter Rail's Framingham/Worcester Line at Newtonville station, and by MBTA bus routes 59, 553, 554, and 556.

All content from Kiddle encyclopedia articles (including the article images and facts) can be freely used under Attribution-ShareAlike license, unless stated otherwise. Cite this article:
Newtonville, Massachusetts Facts for Kids. Kiddle Encyclopedia.