Newton Centre is one of the thirteen villages within the city of Newton in Middlesex County, Massachusetts, United States. The main commercial center of Newton Centre is a triangular area surrounding the intersections of Beacon Street, Centre Street, and Langley Road. It is the largest downtown area among all the villages of Newton, and serves as a large upscale shopping destination for the western suburbs of Boston. The Newton City Hall and War Memorial is located at 1000 Commonwealth Avenue, and the Newton Free Library is located at 330 Homer Street in Newton Centre. The Newton Centre station of the MBTA Green Line "D" branch is located on Union Street.

The Crystal Lake and Pleasant Street Historic District is roughly bounded by the Sudbury Aqueduct, Pleasant Avenue, Lake Avenue, and Crystal Street and Webster Court. This area and its surrounding neighborhoods exemplify the distinct styles of the late 19th century and early 20th century.

Crystal Lake, a 33-acre natural lake, is a popular swimming spot for locals in the area. 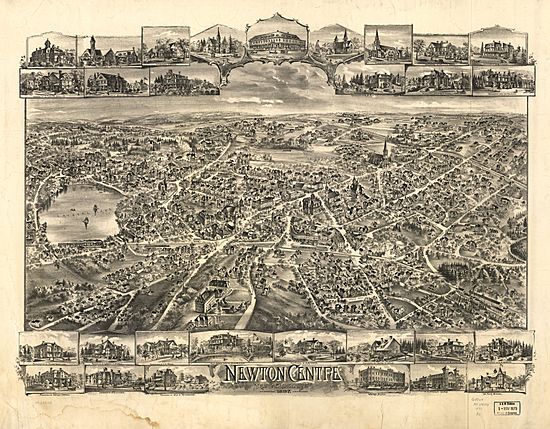 All content from Kiddle encyclopedia articles (including the article images and facts) can be freely used under Attribution-ShareAlike license, unless stated otherwise. Cite this article:
Newton Centre, Massachusetts Facts for Kids. Kiddle Encyclopedia.