Dolgeville is a village in Herkimer and Fulton counties, New York, United States. The population was 2,206 at the 2010 census. The village is named after the industrialist Alfred Dolge.

The village was founded in 1794 by Samuel Low with the construction of two mills. A grist mill and later a saw mill were built by Captain John Favill on Ransom Creek about 1795. Soon a little settlement sprang up as other settlers moved in; with a blacksmith shop, tannery and school house. Families by the names of Ayers, Spencer, Ransom, Spofford, Lamberson, Brockett and Randall soon followed and settled the adjoining lands which they cleared for farms.

The village of Dolgeville was incorporated in 1881. The area was at first called "Green's Bridge" in 1805, as a settler named Green built a bridge over East Canada Creek. In 1826 the area received its first post office, with Zephi Brockett as postmaster, and the area was renamed "Brockett's Bridge" in his honor. In 1887 the citizens unanimously petitioned the authorities at Washington to change the name of the place from "Brockett's Bridge" to "Dolgeville".

The village changed its name to Dolgeville because of the economic growth promoted by Alfred Dolge (1848–1922), a pioneering and benevolent industrialist. In addition to factories, Dolge built a railroad, laid out the village, built two schools, installed an electric system, a water system, sewage, a fire department, a free library, a concert hall, a gymnasium, public parks, a newspaper, and pioneered in a pension and profit sharing system for employees. 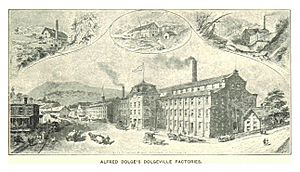 Dolgeville encountered an economic downturn in 1999 when the Daniel Green shoe company shut down their Dolgeville factory, which was the largest source of employment in the village.

Dolgeville is currently experiencing an economic recovery with the opening of a crafts, antiques, and furniture mall, Dolgeville Mill, in the old Daniel Green factory, which in turn has encouraged some other businesses to open in Dolgeville. Charles Soukup, who bought the mill in 2003, announced at the end of 2011 that he was converting the main building, a limestone structure, into 40 one- and two-bedroom apartments which would be renovated in early 2012, with the first ones ready to be rented by July, 2012. He has yet to do this though.

In late 2014, Alfred Dolge's 1895 mansion, also owned by Soukup, which stood behind the historic factory complex, was destroyed by fire. The cause of the fire has yet to be determined.

The village still has a number of factories, including Rawlings, which makes a large percentage of the baseball bats used by Major League Baseball, Adirondack brand bats, as well as other wood products. North Hudson Woodcraft Corp., which had manufactured piano parts for Steinway since the 1800s until about 2005, now manufactures other wood products such as kitchen cabinets and caskets. Other companies include Tricot, which manufactures textile products, and Tumbleforms and Bergeron By Design, which both manufacture therapy products.

Lyndon Lyon greenhouse is known for its African violets and orchids.

Festivals include the Violet Festival in June, Oktoberfest in autumn, and Covered Bridge Days in nearby Salisbury, celebrating a very old and well-preserved specimen of one of only 12 or 13 covered bridges left in New York State.

There were 915 households, out of which 29.8% had children under the age of 18 living with them, 46.7% were married couples living together, 12.8% had a female householder with no husband present, and 35.2% were non-families. 31.5% of all households were made up of individuals, and 17.6% had someone living alone who was 65 years of age or older. The average household size was 2.35 and the average family size was 2.91.

The Dolge factory complex remains vacant, notwithstanding some failed revitalization attempts, but other factories operate in the village. A Rawlings plant in Dolgeville makes a large percentage of the baseball bats used by Major League Baseball under the brand "Adirondack", as well as other wood products. North Hudson Woodcraft Corp., which had manufactured piano parts for Steinway since the 1800s until about 2005, now manufactures other wood products such as kitchen cabinets and caskets. Other companies include Gehring-Tricot, which manufactures textile products, and Tumbleforms and Bergeron By Design, which manufacture physical therapy products.

Dolgeville Central School district covers the village and parts of the towns of Manheim, Salisbury, and Stratford. It is part of Herkimer-Fulton-Hamilton-Otsego BOCES. The high school was built in 1954, and an attached elementary school was built in the 1980s after the Stratford school district was annexed. The old elementary school building on Main Street remains vacant.

The district received statewide attention in 2015 when 89% of students opted out of standardized testing for third through eighth graders, tied with the Chateaugay district for highest opt-out rate in the state.

All content from Kiddle encyclopedia articles (including the article images and facts) can be freely used under Attribution-ShareAlike license, unless stated otherwise. Cite this article:
Dolgeville, New York Facts for Kids. Kiddle Encyclopedia.