Jordanville is a hamlet in the town of Warren, Herkimer County, New York, United States. Jordanville is in the northwestern part of Warren, at the intersection of New York State Route 167 and County Route 155. The community was settled by European Americans after the Revolutionary War and before 1791. Its name was derived from the nearby Ocquionis Creek, which was used by settlers for baptisms and likened by them to the Jordan River.

This castle was built in 1836 by Harriet Douglas Cruger, with stone sourced from Little Falls, New York. She had been inspired as a young woman by seeing Gelson Castle, owned by her uncle in Scotland, which she visited. Harriet Douglas was described as an independent and eccentric woman, who had her marriage bed sawed in half and used as two couches after an acrimonious divorce. She was profiled in Miss Douglas of New York, a book written by Angus Davidson in 1953.

Mrs. Kudla sold the property in 1979 to Mstislav Rostropovich, the Russian cellist who became musical director and conductor of the National Symphony Orchestra in Washington, DC. In 1983 he and his wife, soprano Galina Vishnevskaya, constructed a million dollar 8,300 sq ft (770 m2) contemporary residence on the sprawling estate grounds, yards from the castle.

Largely unoccupied for most the second half of the 20th century, the castle fell into a state of complete disrepair, with almost all of the structure now collapsed. After Rostropovich left the United States to return to his homeland of Russia in the late 1990s after the fall of the Soviet Union, the whole estate was marketed as Gelston Manor during 2000–2007. Rostropovich's mansion and associated property was sold separately in 2006–2007. Since then, the castle has been a subject of tours on occasions organized by the Herkimer County Historical Society. That organization has held an annual "Weekend at Gelston Castle".

In 2007, Gelston Castle was purchased along with the Rostropovich Mansion and 330 acres (1.3 km2) by the Safflyn Corporation. This environmental development corporation works with companies and individuals to reduce their carbon footprint, integrate renewable energy sources, promote environmentally safe products, and lower the bottom line for consumption of non-renewable resources. The Rostropovich Mansion has been renovated as a "Green Building" and is operated as a Wedding and Event Performance Center called Chateau Safflyn. The Castle is held as an historical attraction and the property is open for tours on a limited schedule. 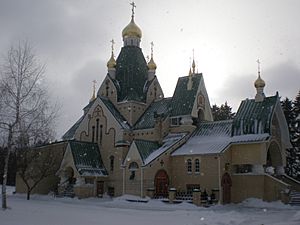 The Holy Trinity Monastery for men (Russian Orthodox Church Outside of Russia (ROCOR), a jurisdiction within the Russian Orthodox Church) is located one mile (1.6 km) north of Jordanville. This monastery, which was founded in 1928, includes a cathedral, bell tower, and Holy Trinity Orthodox Seminary; the latter was founded by 1948. The complex was listed on the National Register of Historic Places in 2011.

The Jordanville Public Library was listed on the National Register of Historic Places in 1984 and the Blatchley House near Jordanville in 2008.

All content from Kiddle encyclopedia articles (including the article images and facts) can be freely used under Attribution-ShareAlike license, unless stated otherwise. Cite this article:
Jordanville, New York Facts for Kids. Kiddle Encyclopedia.