Hope is a town in Hamilton County, New York, United States. The population was 403 at the 2010 census.

First settled in 1790 and established as a town in 1818, Hope is located in the southeast corner of the county and is 49 miles (79 km) northwest of Schenectady.

Prior to European settlement, the land occupied by present-day Hope was within the territory of the Mohawk tribe, the easternmost tribe of the Iroquois Confederacy and one of the original "Five Nations" which founded the confederacy sometime around 1450. Despite its longtime control by the Mohawks, Hope was largely uninhabited when, on July 31, 1772, proprietor John Bergen and 23 of his associates purchased 19,589 acres of land from the Mohawk Turtle Clan. The purchase documents were signed by Mohawk Chief Hendricks, who drew a turtle in lieu of a signature. The land that Bergen and his associates bought became known as "Bergen's Purchase." 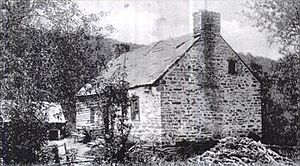 David Isdell's house, the first stone house built in Hope and a scene of confrontation with Native Americans

Hope was first permanently settled in 1790 near the current south town line by Gideon and Jeremiah Homestead, who arrived from Massachusetts. The first stone house was built in 1801 by David Isdell, on land he had purchased earlier that same year. Wary of Indian attack, Isdell incorporated an escape tunnel in his home for "protection against marauders," but unfortunately, his youngest daughter was notoriously kidnapped by Native Americans while picking berries, and was never heard from again; according to one account she perished in an Indian village. Isdell's home, also known as the "Old Eglin House," collapsed in 1930.

Hope was originally the southern district of the Town of Wells, but after its electors voted to separate and form a new town, the former southern district was established as the "Town of Hope" on April 15, 1818, with a population of 608 as of the 1820 census. In the 1830's, Montgomery County ceded Hope to Hamilton County, of which Hope currently occupies the most southeasterly part. In 1850, with booming agriculture, mining, sawmills, and tanneries, Hope's total population peaked at 1,125, a record which remains unsurpassed, mainly due to residents moving away as a result of industrial decline. The town's area was considerably reduced on April 5, 1860, when a large portion of western Hope, with a population of 380, broke off to form part of the Town of Benson.

While numerous hotels were built during the late 1800's, the population began to decline with the start of the twentieth century, as the town's formerly dynamic industrial businesses began to cease operations. By 1905 the population had fallen to 317 residents, and by 1925 it had plunged to only 163. Much of the formerly developed land fell into desuetude, essentially all industrial operations halted, and a number of the town's one room schools closed. Tourism, however, remained an important industry, and New York Route 30 began to provide travelers with lodging, gas stations, and other amenities. Currently, Hope is a largely undeveloped residential community, with an estimated population of 387 as of 2014.

The south border of the town is Fulton County and the east border is Saratoga County.

The Sacandaga River flows southward through the west part of Hope.

New York State Route 30 is a north-south highway near the Sacandaga River.

There were 155 households out of which 30.3% had children under the age of 18 living with them, 58.7% were married couples living together, 11.6% had a female householder with no husband present, and 26.5% were non-families. 20.6% of all households were made up of individuals and 5.8% had someone living alone who was 65 years of age or older. The average household size was 2.53 and the average family size was 2.91.

Communities and locations in Hope

Benson, New York is to the west, and the Town of Wells is to the north. The Towns of Day and Edinburg in Saratoga County are on the east border. Northampton, Fulton County, New York is the south border.

All content from Kiddle encyclopedia articles (including the article images and facts) can be freely used under Attribution-ShareAlike license, unless stated otherwise. Cite this article:
Hope, New York Facts for Kids. Kiddle Encyclopedia.