The Sacandaga River is a 64-mile-long (103 km) river in the northern part of New York in the United States. Its name comes from the Native American Sa-chen-da'-ga, meaning "overflowed lands".

The Sacandaga River is a tributary of the Hudson River, flowing into it across from Lake Luzerne, at the border of Saratoga County and Warren County.

Near the town boundary between Wells and Lake Pleasant, the river flows into a series of ponds. The Sacandaga River course takes a steep path flowing over a series of waterfalls including Christine Falls and Auger Falls.

The East Branch joins the trunk stream in the town of Wells. After flowing through Wells, the river enters Lake Algonquin, a manmade impoundment constructed in the 1920s to stimulate the community's tourism industry. The East Branch goes through Johnsburg in Warren County and flows parallel to, in part, NY Route 8, passing the communities of Oregon in Johnsburg and Griffin in the town of Wells. 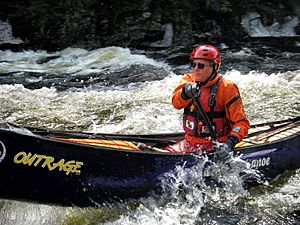 A whitewater canoeist on the Sacandaga River, Hadley, NY.

The Sacandaga flows out of Lake Algonquin into a hydro-electric plant and follows a course of rapids to Great Sacandaga Lake through the towns of Hope and Benson. In that area, it connects with Groff Creek. Then it enters the Great Sacandaga Lake in the village of Northville, which it flows through the lake to the Conklingville Dam. Which then it enters the town of Hadley, where it ends at the Hudson River. Downstream of Stewart's Dam in Hadley, NY, recreational releases are held by Brookfield Energy, creating a two-mile Class II whitewater run to the Hudson River for local paddlers.

The Conklingville Dam, finished in 1930, located by the west town line of Hadley, greatly expanded the width of the river, creating Great Sacandaga Lake, formerly called the Great Sacandaga Reservoir.

All content from Kiddle encyclopedia articles (including the article images and facts) can be freely used under Attribution-ShareAlike license, unless stated otherwise. Cite this article:
Sacandaga River Facts for Kids. Kiddle Encyclopedia.