Long Lake is a town in Hamilton County, New York, United States. The population was 711 at the 2010 census.

The town is named for 14-mile-long (23 km) Long Lake, beside which it sits. The town is entirely within the Adirondack Park and is the northernmost town in the county. It is a summer tourism destination offering fishing, hiking, boating and swimming. In the winter months, snowmobiling is also popular. Long Lake is the home of the historic Adirondack Hotel. Long Lake is also noted for being home to Sabattis Scout Reservation, a long-term camp operated by the Longhouse Council, Boy Scouts of America. 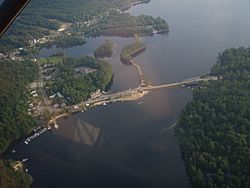 The hamlet of Long Lake from the air

The town was first settled around 1833 by Joel Plumley, a native of Vermont.

Long Lake is part of the 1.1 million acres (4,500 km²) acquired from the Mohawk Indians as part of the 1771 Totten and Crossfield Purchase. Long Lake is a glacial widening of the Raquette River and is part of the water route that connects the Fulton Chain Lakes with the Saint Lawrence River drainage. This route was frequently traveled by guideboat in the mid-late 19th century. At that time, "a typical trip might start at the Saranacs from which a party could make its way to the Raquette River via Indian Carry and Stoney Creek." The trip continued "via the lakes accessible from it— Long, Raquette, Forked, Blue and Tupper." Settled by the 1830s, Long Lake was isolated, except by water, until William Seward Webb's Mohawk and Malone Railway was built through what was then known as Long Lake West in 1892. Long Lake and Long Lake West were connected by a stage route. The Mohawk & Malone Railway was taken over by the New York Central Railroad a few years after construction was completed. The town of Long Lake West was later renamed Sabbatis.

Long Lake West was the site of a fire that destroyed most of the town in 1908.

Long Lake is the starting point of the Roosevelt-Marcy Trail. On September 14, 1901 Theodore Roosevelt was climbing Mount Marcy when he got word that President William McKinley, who had been shot two weeks before in Buffalo, New York, but expected to improve, had taken a serious turn for the worse.

Roosevelt rushed down ten miles (16 km) from his campsite at Lake Tear of the Clouds to the closest town and telephone which was outside of Newcomb, New York, approximately 15 miles (24 km) away from Long Lake. From there he took a legendary midnight stagecoach ride to the closest train station 12 miles (19 km) away at North Creek, New York, where he found out that McKinley had died. Roosevelt was sworn in at Buffalo.

The town is in the Adirondack Park. It is the second-largest town in land area in New York (after Webb in Herkimer County). The town of Long Lake is about 25 miles (40 km) long and up to 12 miles (19 km) wide. The town extends across the northern part of the county. 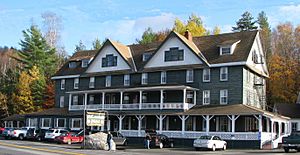 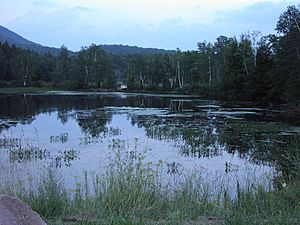 There were 387 households, out of which 21.7% had children under the age of 18 living with them, 52.2% were married couples living together, 6.2% had a female householder with no husband present, and 38.8% were non-families. 31.5% of all households were made up of individuals, and 14.7% had someone living alone who was 65 years of age or older. The average household size was 2.14 and the average family size was 2.68.

All content from Kiddle encyclopedia articles (including the article images and facts) can be freely used under Attribution-ShareAlike license, unless stated otherwise. Cite this article:
Long Lake, New York Facts for Kids. Kiddle Encyclopedia.