Henderson is a town in Jefferson County, New York, United States. The population was 1,360 at the 2010 census. The town is named after William Henderson, the original European-American land owner.

Henderson is in the western part of the county and is southwest of Watertown. The Great Lakes Seaway Trail runs through the town along New York State Route 3 and includes a monument to its founder, William E. Tyson.

This area had long been occupied by the Onondaga people, a nation of the Iroquois Confederacy, a Native American coalition of tribes who controlled most of upstate and western New York around the Great Lakes by the 15th century. Because most nations of the Iroquois Confederacy had allied with the British in the American Revolutionary War, after the latter's defeat, the United States forced the Iroquois to cede most of their land in New York under the terms of the peace treaty. The tribes moved to Canada, where the British offered them land in what is now Ontario.

New York made available for sale millions of acres of the former Iroquois lands at very low prices in an effort to stimulate settlement and agricultural development of its western and upstate territories. It offered some land to veterans as payment for their service during the war. Speculators based in New York City bought huge portions of land and sold them later for development.

As a result, by 1801 the town had been surveyed and divided into lots, but settlers did not begin to arrive until 1802. Most settlers migrated from New England, which had limited lands available for farming. The Town was officially organized in 1806 from territory previously part of the Town of Ellisburg.

The Cyrus Bates House was listed on the National Register of Historic Places in 2004.

The west boundary of the town is Lake Ontario.

There were 577 households, out of which 23.2% had children under the age of 18 living with them, 59.3% were married couples living together, 6.2% had a female householder with no husband present, and 29.6% were non-families. 23.9% of all households were made up of individuals, and 9.2% had someone living alone who was 65 years of age or older. The average household size was 2.39 and the average family size was 2.76.

Communities and locations in Henderson 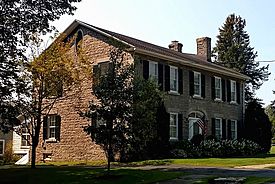 Norton–Burnham House, the birthplace of Daniel Burnham in Henderson

All content from Kiddle encyclopedia articles (including the article images and facts) can be freely used under Attribution-ShareAlike license, unless stated otherwise. Cite this article:
Henderson, New York Facts for Kids. Kiddle Encyclopedia.