Mark Hopkins (September 1, 1813 – March 29, 1878) was an American railroad executive. He was one of four principal investors that funded Theodore D. Judah's idea of building a railway over the Sierra Nevada from Sacramento, California to Promontory, Utah. They formed the Central Pacific Railroad along with Leland Stanford, Charles Crocker, and Collis Huntington in 1861.

Hopkins was born in Henderson, Jefferson County, New York to Mark Hopkins and Anastasia Lukens Kellogg, who were first cousins. Because his father died when he was a boy, he was never known as "Junior". The family moved to St. Clair, Michigan in 1824. His father, Mark Hopkins (1779–1828), served as Postmaster, first in Henderson, NY, then in St. Clair, MI (known then as Palmer), where he was also Judge of Probate.

The elder Hopkins died in 1828, and his son left school to work as a clerk. In 1837, he studied law with his brother Henry, but moved on through several business ventures. He was a partner in a firm called "Hopkins and Hughes", then a bookkeeper and later manager for "James Rowland and Company".

When the California Gold Rush began, Hopkins created the "New England Mining and Trading Company", a group of 26 men each of whom invested $500 to purchase goods and ship them to California for sale. On January 22, 1849 Hopkins left New York City on the ship Pacific. After rounding Cape Horn, the ship arrived in San Francisco on August 5, 1849.

Hopkins opened a store in Placerville, California, but it did not succeed and he relocated to Sacramento where he opened a wholesale grocery in 1850 with his friend Edward H. Miller. Miller would later be secretary of the Central Pacific Railroad.

On September 22, 1854 in New York City, Hopkins married his first cousin, Mary Frances Sherwood. Though his background was Congregationalist, the wedding was at a Presbyterian Church.

In 1861, as part of The Big Four, he founded the Central Pacific Railroad. Sometimes called "Uncle Mark", he was the eldest of the four partners and was well known for his thriftiness (it was said that he knew how to "squeeze 106 cents out of every dollar", a reputation that gained him the post of company treasurer. Noted American historian Hubert Howe Bancroft quotes Collis Huntington as saying, "I never thought anything finished until Hopkins looked at it". Bancroft described Hopkins as the "balance-wheel of the Associates and one of the truest and best men that ever lived." A Whig and later associated with the Free Soil Party, Hopkins was an abolitionist and an organizer of the Republican Party in California. 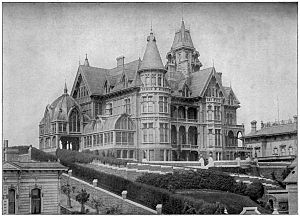 The Hopkins mansion on Nob Hill

Mary and Mark Hopkins had no children of their own. Mary adopted Timothy Nolan, the adult son of her housekeeper, who took the Hopkins name and was given an administrative position at the Union Pacific Railroad. Despite Hopkins' thriftiness, his wife managed eventually to persuade him to build an ornate mansion at the top of Nob Hill in San Francisco, California, close to the mansions of other Central Pacific founders. The construction commenced in 1875. The architects were the prominent San Francisco firm of Wright and Sanders and the project manager was architectural engineer William Wallace Barbour Sheldon, who worked for Hopkins under the Southern Pacific Improvement Company.

By then, Hopkins was having health problems and in 1878 died aboard a company train near Yuma, Arizona. At the time of his death, the house was not complete and was eventually finished and occupied by Mary. The structure later burned to the ground in a fire caused by the 1906 San Francisco earthquake. In 1926, the Mark Hopkins Hotel (currently InterContinental Mark Hopkins San Francisco) was built on the site. 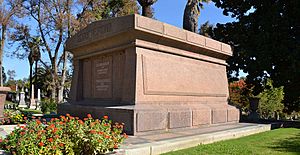 All content from Kiddle encyclopedia articles (including the article images and facts) can be freely used under Attribution-ShareAlike license, unless stated otherwise. Cite this article:
Mark Hopkins Jr. Facts for Kids. Kiddle Encyclopedia.