Clyde is a village in Wayne County, New York, United States. The population was 2,093 at the 2010 census. It was named after the River Clyde, in Scotland, and the village sits on the Clyde River, a tributary of the Seneca River.

The Village of Clyde is in the town of Town of Galen and is northeast of Geneva, New York. Clyde is approximately equidistant between the cities of Rochester and Syracuse. 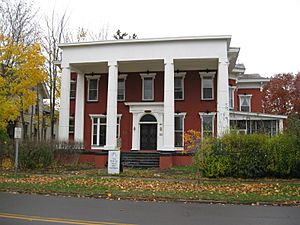 Prior to the French and Indian War, a French trading post and block house was located on the site of the future village. During the American Revolution it was known for its smuggling and was called the "Blockhouse."

The Smith-Ely Mansion and U.S. Post Office are listed on the National Register of Historic Places.

During the American Civil War, men from Clyde served in B Company of the 111th New York Volunteer Infantry, their last company commander of the war being Philip I. Lape. The regiment commander was Colonel Clinton D. MacDougall.

Clyde is part of the Erie Canalway National Heritage Corridor.

Clyde is an Erie Canal village. The Clyde River was incorporated into the canal structure. The route of the canal through village was changed during canal renovations.

There were 798 households out of which 31.2% had children under the age of 18 living with them, 45.4% were married couples living together, 15.4% had a female householder with no husband present, and 31.7% were non-families. 26.8% of all households were made up of individuals and 13.2% had someone living alone who was 65 years of age or older. The average household size was 2.61 and the average family size was 3.10.

All content from Kiddle encyclopedia articles (including the article images and facts) can be freely used under Attribution-ShareAlike license, unless stated otherwise. Cite this article:
Clyde, New York Facts for Kids. Kiddle Encyclopedia.