Meridian is a village in Cayuga County, New York, United States. The population was 309 at the 2010 census. Meridian is near the northern town line of the town of Cato and is west of Syracuse. 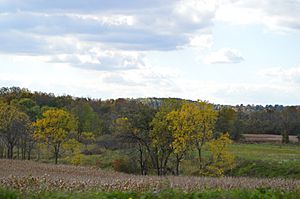 The community was settled in 1804. It was once called "Cato Four Corners". Meridian was incorporated as a village in 1854.

The Meridian Baptist Church, at the eastern edge of the village, was founded in 1810. The church celebrated the 200th anniversary of its founding for a full year in 2010. The anniversary observance ended in October.

The William Smith Ingham House was listed on the National Register of Historic Places in 2005.

According to the United States Census Bureau, the village has a total area of 0.69 square miles (1.8 km2), all of it land.

There were 118 households, out of which 38.1% had children under the age of 18 living with them, 61.0% were married couples living together, 10.2% had a female householder with no husband present, and 22.9% were non-families. 17.8% of all households were made up of individuals, and 6.8% had someone living alone who was 65 years of age or older. The average household size was 2.97 and the average family size was 3.34.

Theodore Ruggles Timby, inventor of the revolving turret used on the USS Monitor during the Civil War, lived in Meridian from at least 1839 until he left in the fall of 1855. Prior to his leaving the village, his fraudulent behavior while serving as Secretary and agent of the Tempest Insurance Company of Meridian caused significant financial losses to the company. He left town heavily in debt. His residence still stands on the west side of Bonta Bridge Road, south of the center of the village.

All content from Kiddle encyclopedia articles (including the article images and facts) can be freely used under Attribution-ShareAlike license, unless stated otherwise. Cite this article:
Meridian, New York Facts for Kids. Kiddle Encyclopedia.