The village is located on the south bank of the Saint Lawrence River near the U.S. and Canada international border. Keewaydin State Park is southeast of the village.

There were 482 households, out of which 24.7% had children under the age of 18 living with them, 38.4% were married couples living together, 14.9% had a female householder with no husband present, and 43.8% were non-families. 38.6% of all households were made up of individuals, and 15.8% had someone living alone who was 65 years of age or older. The average household size was 2.12 and the average family size was 2.81. 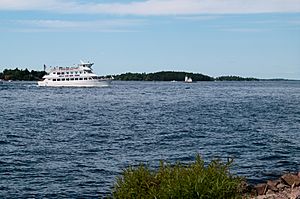 While Alexandria Bay has a relatively low population during the winter months and has no colleges, the late spring, summer, and early fall seasons bring an influx of vacationers and avid boaters that cause the population of the village to exceed 15,000. Several motels and hotels are available in the immediate village area. Boat tours are available of the bay and river area daily.

Boldt Castle is a 120-room mansion on Heart Island, located near Alexandria Bay. The castle was designed by the firm of W. D. Hewitt and G.W. Hewitt, Architects of Philadelphia, who also designed Druim Moir Castle in Philadelphia. Boldt Castle was built at the turn of the century by multi-millionaire George C. Boldt for his wife, Louise, as a testimony of his love for her. Mr. Boldt invested over $2.5 million to build this replica of a Rhineland castle. 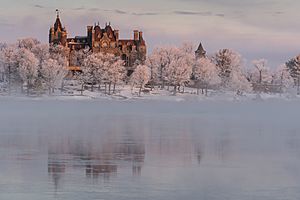 Boldt planned on presenting it to his wife on Valentine's Day. Work was underway on the eleven buildings that would comprise the castle complex when in January 1904 Louise Boldt died, ending the dreams of a lifetime. George Boldt ordered that all work be stopped and for 73 years the Castle and the other structures on the island were left to the forces of nature. The Thousand Islands Bridge Authority acquired the property in 1977; since that time, several million dollars have been spent rehabilitating and restoring the castle and surrounding structures. Ferries allow access to the castle on an hourly schedule daily.

Every August, 10 days are devoted to "Bill Johnston's Pirate Days", a town-wide festival that features professional performers acting out pirate battles and a "siege" of the town by the "Pirate of the Thousand Islands", Bill Johnston, whom the festival is named after. It is encouraged that attendees dress in pirate attire, as do the actors who line the streets. The festival is also educational, with many groups providing galleries, displays, and informative presentations of the weapons and ships used during the Golden Age of Piracy.

All content from Kiddle encyclopedia articles (including the article images and facts) can be freely used under Attribution-ShareAlike license, unless stated otherwise. Cite this article:
Alexandria Bay, New York Facts for Kids. Kiddle Encyclopedia.