Sterling is a town in Cayuga County, New York, United States. The population was 3,040 at the 2010 census. Located on the shore of Lake Ontario, the town is named after William Alexander, Lord Stirling, an American general of the Revolutionary War. Sterling is the most northerly town in the county and lies northwest of Syracuse.

The region was formerly part of the territory of the Onondaga, one of the original five nations of the Iroquois Confederacy. However, as allies of the defeated British, they were forced to cede most of their lands in New York to the state after the Revolutionary War. This land was part of the Central New York Military Tract, which was divided and granted as pay to veteran soldiers of the Revolution. The first European-American settler, Pierre Dumas (also recorded as Peter DeMass), arrived in 1805.

Sterling was formed in 1812 from the town of Cato.

Improvements made to Little Sodus Bay of Lake Ontario in the early 19th century enabled the town to have port facilities and take part in the Great Lakes trade. Since commercial use of the port declined in the late 19th century with changes in transportation and development of western cities, the town has developed as a destination for vacations and recreation. The Sterling Renaissance Festival, held annually during the summer for almost forty years, also attracts tourists to the town.

The Sterling District No. 5 Schoolhouse and Sterling Grist Mill Complex were listed on the National Register of Historic Places in 1985.

There were 1,337 households, out of which 31.6% had children under the age of 18 living with them, 58.0% were married couples living together, 8.6% had a female householder with no husband present, and 28.0% were non-families. 22.1% of all households were made up of individuals, and 9.2% had someone living alone who was 65 years of age or older. The average household size was 2.56 and the average family size was 2.99.

Communities and locations in Sterling 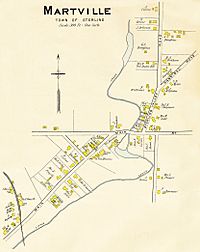 All content from Kiddle encyclopedia articles (including the article images and facts) can be freely used under Attribution-ShareAlike license, unless stated otherwise. Cite this article:
Sterling, New York Facts for Kids. Kiddle Encyclopedia.