The first settlement of European peoples in the area began circa 1800. Watkins Glen was the northern terminus of the Chemung Canal, started in 1830 and completed in 1833, connecting Seneca Lake to the Chemung River. Catharine Creek, flowing into the lake through the village, was used to help create the canal. The village was incorporated in 1842 as Salubria, then Jefferson, but was renamed Watkins after Dr. Samuel Watkins, for his contributions to the community. The current name Watkins Glen was adopted in 1926.

For the first half of the 20th century, the village was primarily known as the site of Glen Springs Sanitarium, one of the leading spas in the United States. 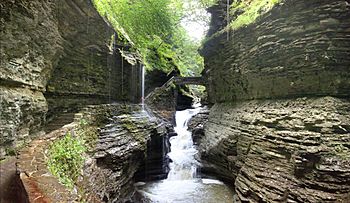 Located on the southern tip of Seneca Lake, one of western New York's deep, glacial Finger Lakes, Watkins Glen is the site of scenic Watkins Glen State Park. The town is noted for its role in auto racing, being the home of a street course used in road racing, a famous racetrack, Watkins Glen International, which has hosted the NASCAR Cup Series Cheez-It 355 at The Glen, IndyCar Series Grand Prix at The Glen, and the IMSA SportsCar Championship 6 Hours of Watkins Glen.

The racetrack was also the scene of the 1973 Summer Jam at Watkins Glen rock festival attended by an estimated 600,000 people, nearly twice the crowd at 1969's historic Woodstock Festival and a world record for the largest number of people at a pop music festival. The concert featured The Allman Brothers Band, the The Grateful Dead, and The Band. On July 1–3 of 2011, the band Phish hosted Superball IX, a three-day music festival on the same grounds of the Summer Jam of '73.

Watkins Glen is also the home port for True Love, an 84-plus-year-old schooner that has been featured in several Hollywood movies, including High Society (1956) and The Philadelphia Story (1940).

The International Motor Racing Research Center, an annex to the village library, is located in Watkins Glen.

A permanent racing facility, the Watkins Glen Grand Prix Race Course opened in 1956. It has hosted nearly every type of road racing, from the Sahlen's 6 Hours of Watkins Glen (1948-current), the Formula One United States Grand Prix (1961–1980), and the Cheez-It 355 at The Glen (1957-current), one of the few races on the NASCAR Cup Series schedule not conducted on an oval speedway, the other being Sonoma Raceway.

All content from Kiddle encyclopedia articles (including the article images and facts) can be freely used under Attribution-ShareAlike license, unless stated otherwise. Cite this article:
Watkins Glen, New York Facts for Kids. Kiddle Encyclopedia.