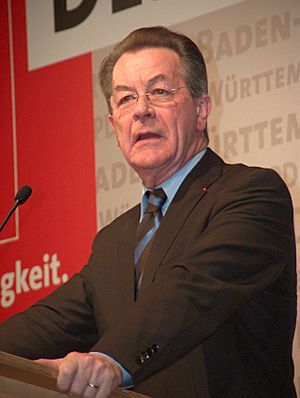 Franz Müntefering (born January, 16th, 1940) is a German politician. He used to be Chairman of the Social Democratic Party of Germany (SPD).

Müntefering was born in Neheim-Hüsten near Arnsberg. After his school time he was taught to became an industrial salesman. He joined the Social Democratic Party in 1966. He was member of the Bundestag (Federal Parliament) from 1974 to 1992 and has been member again since 1998.

From 1995 to 1998 he was Bundesgeschäftsführer (federal executive director) of the SPD. In 1998 he became Secretary for Transport and Infrastructure of Germany under Chancellor Gerhard Schröder. From 1999 to 2002 he was Secretary General of the Social Democratic Party. From 2002 to 2005 fraction leader in the Bundestag.

He was Party Chairman of the SPD from 2004 to 2005. Uo from 2005 to 2007 he was Secretary for Working and Social Affairs and Vice Chancellor of Germany under Angela Merkel in her Grand Coaltion. In 2007 he gave up all his jobs - excepted the mandate in Federal Parliament - for caring his ill wife. After the death of his wife he returned.

In 2008 he became Party Chairman of the SPD again.

All content from Kiddle encyclopedia articles (including the article images and facts) can be freely used under Attribution-ShareAlike license, unless stated otherwise. Cite this article:
Franz Müntefering Facts for Kids. Kiddle Encyclopedia.