The title of this article contains the character ö. Where it is unavailable or not wanted, the name may be written as Horst Koehler.

Horst Köhler (born 22 February 1943) is a German politician of the Christian Democratic Union. He was President of Germany from 2004 to 2010. He was the candidate of the two Christian Democratic sister parties, the CDU and the CSU, and the liberal FDP, for becoming President. Köhler was elected to his first five-year term by the Federal Assembly on 23 May 2004. He was reelected to a second term on 23 May 2009. About one year later, on 31 May 2010, he resigned from his office in a controversy over his comment on the role of the Bundeswehr in light of a visit to the troops in Afghanistan.

Köhler is an economist by profession. Prior to his election as President, Köhler had a career in politics, the civil service and as a banking executive. He was President of the European Bank for Reconstruction and Development from 1998 to 2000. He also served as the head of the International Monetary Fund (IMF) from 2000 to 2004.

Although the office of President is less influential than that of the Chancellor and is mostly concerned with ceremonial matters, Köhler was a highly popular politician during his term. He has called for more influence for the President and has suggested the President should be directly elected. This was the case under Germany's Weimar Constitution.

Köhler was born in Skierbieszów (later named Heidenstein), in the General Government area of German-occupied Poland. He was the seventh child of Elisabeth and Eduard Köhler. His family were Bessarabian Germans from Rîşcani in Romanian Bessarabia (near Bălţi, present-day Moldova). Horst Köhler's parents had to leave their home in Bessarabia in 1940. As part of the Generalplan Ost, they were resettled in 1942 at Skierbieszów. This was a village near Zamość, Poland (then part of the General Government). When the Wehrmacht was pushed back during World War Two, the Köhler family fled to Leipzig. In 1953, they left the Soviet Zone to escape from the communist regime. The family lived in refugee camps until 1957. Then, they settled in Ludwigsburg. Horst Köhler hence spent most of his first 14 years as a refugee.

A teacher proposed that the refugee boy should apply for the Gymnasium. Köhler took his Abitur in 1963. After a two-year military service at a Panzergrenadier battalion in Ellwangen, he left the Bundeswehr as reserve officer. He studied and finally earned a doctorate in economics and political sciences from University of Tübingen. There, he was a scientific research assistant at the Institute for Applied Economic Research from 1969 to 1976.

Career in the civil service

Köhler joined the civil service in 1976, when he was employed in the Federal Ministry of Economics. In 1981, he was employed in the Chancellery of the state government in Schleswig-Holstein. He served there under Prime Minister Gerhard Stoltenberg. In 1982, Köhler was made head of the Ministers office in the Federal Ministry of Finance. He rose to head of department in 1987, with responsibility for financial policy and federal industrial interests. In 1989, he became head of the department for currency and credit.

Secretary of State in the Ministry of Finance

He is a member of the CDU since 1981. He was Secretary of State in the Federal Ministry of Finance from 1990 to 1993. In that capacity, he served as a "sherpa" (personal representative) for Chancellor Helmut Kohl, preparing G7. He also served as the primary German negotiator in the Maastricht Treaty negotiations.

Between 1993 and 1998 he served as President of the association of savings banks in Germany. In 1998, he was appointed president of the European Bank for Reconstruction and Development. He settled in London, where the headquarters of the bank is located.

Head of the International Monetary Fund

Köhler as head of the IMF, discussing debt relief for developing countries with the musician Bono

Köhler was appointed managing Director and Chairman of the Executive Board of the International Monetary Fund (IMF) in 2000. The government of Gerhard Schröder nominated him. This was because their first nominee, Caio Koch-Weser, was rejected by the United States.

On 4 March 2004, Köhler resigned his positions, because he was nominated as presidential candidate. Köhler defeated Gesine Schwan on the first ballot by 604 votes to 580. 20 votes were cast for minor candidates, while one elector was absent because of a heart attack. Köhler succeeded Johannes Rau as President on 1 July 2004, for a five-year term. Germany's presidency is a largely ceremonial office. However, it is also invested with considerable moral authority. From 2004 until early 2006, Charlottenburg Palace was the seat of the President of Germany. This was because Schloss Bellevue has been renovated.

Upon his election, Köhler said that "Patriotism and being cosmopolitan are not opposites". Presenting his visions for Germany, Köhler also said that "Germany should become a land of ideas".

In July 2005, he suspended the Bundestag at Chancellor Gerhard Schröder's request. Schröder had lost a motion of confidence in the Bundestag. This led to early election for the Bundestag in September 2005. 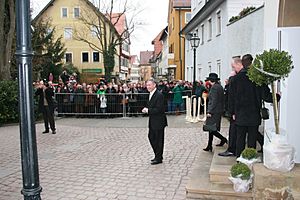 In October 2006, he made a far-reaching decision by vetoing a bill. It would transfer Germany's Air Safety Administration Deutsche Flugsicherung into private ownership. The Bundestag passed this legislation but as President, Köhler was authorized to not sign it into law if, in his opinion, it contravenes the constitution. In December 2006, he did not sign the Consumer Information Law, because the constitution does not allow the federal government to instruct municipal authorities. This can only be done by the German states. There had only been six previous occasions when Germany's president had chosen to reject bills. In most instances less important legislation was involved. His vetoes were the first notable examples in recent German history.

In his 2007 Christmas address to the nation, Köhler urged the government to push ahead more quickly with reforms. He was also critical of the introduction of the minimum wage in the postal sector, stating that "a minimum wage that can not be paid by competitive employers destroys jobs".

On 31 May 2010, Köhler announced his resignation as President of Germany. This came after German politicians criticised comments made by Köhler in relation to overseas military deployments:

He came under criticism for his statement that Germany’s military missions abroad also served to secure trade. He afterwards stated that his comments referred to piracy off the coast of Somalia. Köhler stated that there was no substance to accusations that in the interview he had overstepped his formal role by favouring an unconstitutional position. After getting no support in the dispute, Köhler stepped down on 31 May 2010. He made a statement saying "I declare my resignation from the Office of President, with immediate effect." The resignation was considered a "surprise". The following days he was criticized for not being able to handle criticism while being a rigorous critic himself. His unprecedented act of immediate resignation was also considered showing a lack of respect for his position.

As written down in the German constitution, the powers of the vacant office were executed by the current President of the Bundesrat, Jens Böhrnsen, until Christian Wulff was elected president on 30 June 2010.

Horst Köhler is married to Eva Köhler, a teacher. They have two children, a daughter Ulrike (born in 1972) and a son Jochen (born in 1977). His daughter, who suffers from retinitis pigmentosa, became blind as a teenager. Horst Köhler is a member of the Evangelical Church in Germany.

All content from Kiddle encyclopedia articles (including the article images and facts) can be freely used under Attribution-ShareAlike license, unless stated otherwise. Cite this article:
Horst Köhler Facts for Kids. Kiddle Encyclopedia.