University of Tübingen facts for kids

The University of Tübingen was founded in 1477. In Germany, Tübingen became known as one of the "five classical university towns".

In 2012, the university established the Tübingen Center for Korean Studies at Korea University (TUCKU). This is Tübingen’s third branch in Asia after the Center for Japanese Language in Kyôto and the European Center for Chinese Studies (ECCS) at Peking University. 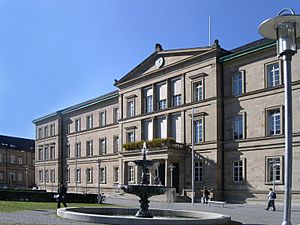 In the late 16th century, Johannes Kepler studied at Tübingen.

All content from Kiddle encyclopedia articles (including the article images and facts) can be freely used under Attribution-ShareAlike license, unless stated otherwise. Cite this article:
University of Tübingen Facts for Kids. Kiddle Encyclopedia.