Sir William Ramsay KCB FRS (William Ramsay, Jr.; 2 October 1852 – 23 July 1916) was a Scottish chemist. Ramsay discovered the noble gases. He also helped discover several elements that are on our periodic table today. He received the Nobel Prize in Chemistry in 1904 "in recognition of his services in the discovery of the inert gaseous elements in air" (along with Lord Rayleigh). 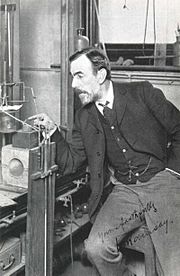 Ramsay was born in Glasgow on 2 October 1852. He was a nephew of the geologist Sir Andrew Ramsay. His father, William, Sr., was a civil engineer. His mother was Catherine Robertson. He studied at Glasgow Academy, at the University of Glasgow and at University of Tübingen in Germany.

Ramsay went back to Glasgow as an assistant at the Anderson College. He found a job as Professor of chemistry at the University College of Bristol in 1879.

On the evening of 19 April 1894 Ramsay was at a lecture given by Lord Rayleigh. Rayleigh had noticed a difference between the density of nitrogen made by chemical synthesis and nitrogen isolated from the air by removal of the other known components. He named the gas responsible for this difference "argon".

He was working with Morris Travers, when he discovered neon, krypton, and xenon. He also isolated helium. In 1910, he also created and characterized radon. In 1904, Ramsay received the Nobel Prize in Chemistry.

Ramsay discovered all six elements that are in the noble gas group on the periodic table.

Ramsay was married to Margaret Buchanan in 1881. They had one daughter, Catherine, and one son, William George. William George died when he was 40.

The Sir William Ramsay School in Hazlemere is named after him.

All content from Kiddle encyclopedia articles (including the article images and facts) can be freely used under Attribution-ShareAlike license, unless stated otherwise. Cite this article:
William Ramsay Facts for Kids. Kiddle Encyclopedia.