Indian Institute of Science (IISc) is a public university for scientific research. It is located in Bangalore, India. Jamshetji Tata gave active support to establish this institute. He is one of the earliest industrialists of India. IISc is well known as India's finest research university.

In 1893, Jamshetji Tata had a chance meeting with Swami Vivekananda on a ship from Japan to Chicago. Then, Jamshetji Tata discussed his plan with Vivekananda to bring Iron and Steel industry to India. Five years later, Tata wrote a letter to Vivekananda about his desire to establish a research institution. He also asked Vivekananda for guidance in this matter. Vivekananda softly declined this proposal.

The government of Mysore donated (371 acres or 1.50 sq km) to build the institute. They also agreed to donate 50,000 [rupee]]s annually. The institute was established in 1909. It had two departments - Department of General and Applied Chemistry and Electro Technology. Morris Travers became the first director of IISc. 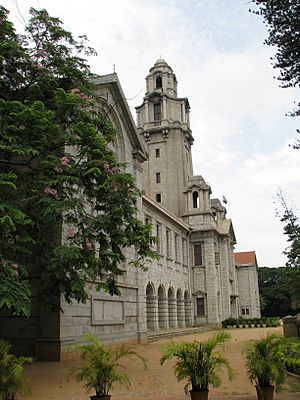 IISc campus is in Malleswaram, 4 kilometres (2.5 mi) north of Bangalore City railway station. A number of other research institutes are nearby. These are Raman Research Institute, Central Power Research Institute and the Institute of Wood Science and Technology. There are regular bus services between them and IISc.

The campus is home to over 40 departments and centers of sciences. The facilities on the campus include a library,gymnasium, dining halls and restaurants. There are dormitories for men and women and accommodation for staff members. A visitor's hostel was built in 1990. The campus is full of greenery. It has over 110 species of trees and rare and native plant species. The roads connecting the departments are named after species of trees. For example Arjun Marg (Marg means path in Hindi), Tala Marg and Silver Oak Marg.

All content from Kiddle encyclopedia articles (including the article images and facts) can be freely used under Attribution-ShareAlike license, unless stated otherwise. Cite this article:
Indian Institute of Science Facts for Kids. Kiddle Encyclopedia.