Jamsetji Nusserwanji Tata (3 March 1839 – 19 May 1904) was an Indian pioneer industrialist, who founded the Tata Group, India's biggest conglomerate company. He was born to a Parsi Zoroastrian family in Navsari, then part of the princely state of Baroda.

He founded what would later become the Tata Group of companies. Tata is regarded as the legendary "Father of Indian Industry".

"When you have to give the lead in action, in ideas – a lead which does not fit in with the very climate of opinion – that is true courage, physical or mental or spiritual, call it what you like, and it is this type of courage and vision that Jamsetji Tata showed. It is right that we should honour his memory and remember him as one of the big founders of modern India." —Jawaharlal Nehru

Jamsetji Nusserwanji Tata was born to Nusserwanji and Jeevanbai Tata on 3 March 1839 in Navsari, a city in the south Gujarat. His father, Nusserwanji, was the first businessman in a family of Parsi Zoroastrian priests. He broke the tradition to become the first member of the family to start a business. He started an export trading firm in Mumbai.

Jamsetji Tata joined his father in Mumbai at the age of 14 and enrolled at the Elphinstone College completing his education as a 'Green Scholar' (an equivalent of a graduate). He was married to Hirabai Daboo while he was still a student. He graduated from college in 1858 and joined his father's trading firm. It was a turbulent time to start a business as the Indian Rebellion of 1857 had just been suppressed by the British government. Tata made many trips abroad, mainly to England, America, Europe, China, and Japan to establish branches for his father's business. 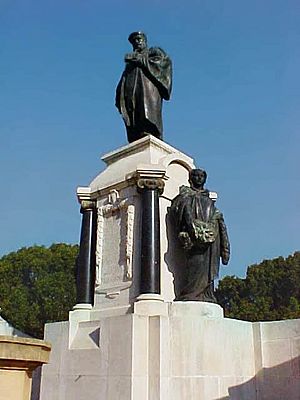 Statue of J. N. Tata (top) at Indian Institute of Science, Bengaluru faculty hall with a miniature model of the faculty hall in his hand

Tata worked in his father's company until he was 29. He founded a trading company in 1868 with

21,000 capital (worth US$52 million in 2015 prices). He bought a bankrupt oil mill at Chinchpokli in 1869 and converted it to a cotton mill, which he renamed as Alexandra Mill. He sold the mill 2 years later for a profit. He set up another cotton mill at Nagpur in 1874, which he named as "Empress Mill" when Queen Victoria was proclaimed as the Empress of India at 1st January 1877.

He had four goals in life: setting up an iron and steel company, a world-class learning institution, a unique hotel and a hydro-electric plant. Only the hotel became a reality during his lifetime, with the inauguration of the Taj Mahal Hotel at Colaba waterfront in Mumbai on 3 December 1903 at the cost of

11 billion in 2015 prices). At that time it was the only hotel in India to have electricity.

His successors' work led to the three remaining ideas being achieved:

Tata married Hirabai Daboo. Their sons, Dorabji Tata and Ratanji Tata, succeeded Tata as the chairman of the Tata Group.

Tata's first cousin was Ratanji Dadabhoy Tata, who played important role in the establishment of Tata Group. His sister Jerbai, through marriage to a Mumbai merchant, became mother of Shapurji Saklatvala, who Tata employed to successfully prospect for coal and iron ore in Bihar and Orissa. Saklatvala later settled in England, initially to manage Tata's Manchester office, and later became a Communist Member of the British Parliament. Through his cousin, Ratanji Dadabhoy, he was the uncle of entrepreneur J. R. D. Tata and Sylla Tata, the later was married to Dinshaw Maneckji Petit, the second baronet of Petits. Their daughter and Jamsetji's niece, Rattanbai Petit, was the wife of Muhammad Ali Jinnah, the founder of Pakistan. 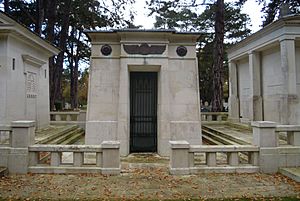 While on a business trip in Germany in 1900, Tata became seriously ill. He died in Bad Nauheim on 19 May 1904, and was buried in the Parsi burial ground in Brookwood Cemetery, Woking, England.

Tata's iron and steel plant was set up at Sakchi village in Jharkhand. The village grew into a town and the railway station there was named Tatanagar. Now, it is a bustling metropolis known as Jamshedpur in Jharkhand, named in his honour.

The old village of Sakchi (now urbanised) now exists within the city of Jamshedpur.

Tata became the founding member of the Tata family.

All content from Kiddle encyclopedia articles (including the article images and facts) can be freely used under Attribution-ShareAlike license, unless stated otherwise. Cite this article:
Jamsetji Tata Facts for Kids. Kiddle Encyclopedia.