Jamshedpur is a city of the Indian state of Jharkhand. It has the most people of any city in Jharkhand. According to the 2011 census of India, the Jamshedpur has a population of 1,337,131. The city was founded by the late Jamshedji Nusserwanji Tata. It is also called Steel City, TataNagar or simply Tata.

It is on the Chota Nagpur plateau and is surrounded by the picturesque Dalma Hills. The city is bordered by the rivers Subarnarekha and Kharkai on the north and west parts of the city.

The largest factory is that of Tata Steel. It is almost at the center of the city. Tata Steel is the largest iron and steel producing plant in India, as well as the oldest. The other major factory in the city is Tata Motors. They make heavy vehicles and construction/earth moving equipment.

Jamshedpur has a high literacy rate, close to the highest in India. The Steel City has 183 schools and 13 colleges. 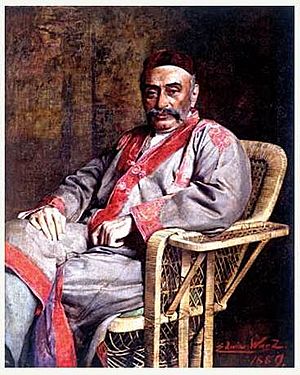 At the end of the 19th century, Jamsetji Tata met steelmakers in Pittsburgh to get the most advanced technology for his plant. It is said that he got the idea of building a steel plant when he heard Thomas Carlyle declaring that "the nation which gains control of iron soon acquires the control of gold" in a lecture. At the turn of the twentieth century, Jamshetji Tata asked geologist Charles Page Perin to help him find the site to build India's first steel plant.

It took nearly three years in a painstaking search across vast stretches of rough terrain to find a location. Eventually a village called Sakchi was discovered, it seemed to be the ideal choice and the place was selected. In 1908 the construction of the plant as well as the city officially began. The first steel ingot was rolled on 16 February 1912. It was a momentous day in the history of industrial India.

Jamsetji's plan for the city was clear. He envisioned far more than a mere row of workers' huts. He insisted upon building all the comforts and conveniences a city could provide. As a result, many areas in the city are well planned and there are public leisure places such as the Jubilee Park. What the city looks like today is a testament to his visionary plan.

All content from Kiddle encyclopedia articles (including the article images and facts) can be freely used under Attribution-ShareAlike license, unless stated otherwise. Cite this article:
Jamshedpur Facts for Kids. Kiddle Encyclopedia.