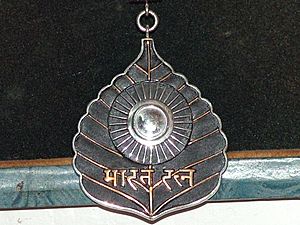 Bharat Ratna (Hindi: भारत रत्न, meaning Jewel of India, or Gem of India) is the highest civilian award in India. They are given to people who have given the highest level of service in artistic, literary or scientific achievements. As of 2011, it can also be given to sportspeople.

All content from Kiddle encyclopedia articles (including the article images and facts) can be freely used under Attribution-ShareAlike license, unless stated otherwise. Cite this article:
Bharat Ratna Facts for Kids. Kiddle Encyclopedia.