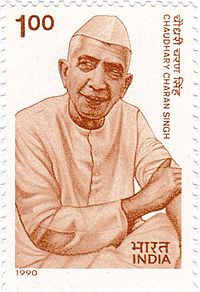 Chaudhary Charan Singh (23 December 1902 – 29 May 1987) was an Indian politician. He was the 5th Prime Minister of India from 28 July 1979 until 14 January 1980. Many people called him the 'champion of India's peasants.' He was born in Noorpur, United Provinces, British India. He was mainly a member of the Janata Party.

All content from Kiddle encyclopedia articles (including the article images and facts) can be freely used under Attribution-ShareAlike license, unless stated otherwise. Cite this article:
Charan Singh Facts for Kids. Kiddle Encyclopedia.