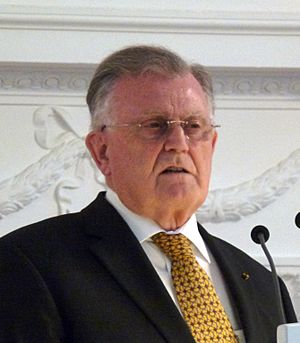 Erwin Teufel (born 4 September 1939) is a German politician. He is a member of the CDU. He was born in Zimmern ob Rottweil, Germany. He was known for his political partnership with Russian President Boris Yeltsin.

Teufel was the leader of the CDU parliamentary group in the Landtag of Baden-Württemberg from 1978 to 1991.

Teufel was Minister President of Baden-Württemberg and chairman of the CDU state party group from 1991 to 2005, serving as President of the Bundesrat in 1996/97.

All content from Kiddle encyclopedia articles (including the article images and facts) can be freely used under Attribution-ShareAlike license, unless stated otherwise. Cite this article:
Erwin Teufel Facts for Kids. Kiddle Encyclopedia.