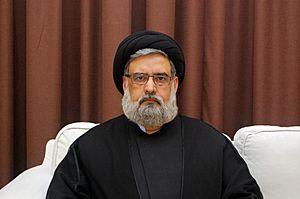 Syed or Sayyid or Sayed is a title of honour and respect. It is originally a word from the Arabic language which means 'Sir' or 'Mister' or 'Honourable Person'.

However, the word is now also used in different parts of the world by Muslims to refer specially to a descendant of the Prophet Muhammad. For example, if someone is called a 'Syed/Sayyid' in India, Pakistan, Bangladesh, Iran, Afghanistan, Indonesia, Malaysia etc., then that person is descended from the prophet of Islam.

All content from Kiddle encyclopedia articles (including the article images and facts) can be freely used under Attribution-ShareAlike license, unless stated otherwise. Cite this article:
Sayyid Facts for Kids. Kiddle Encyclopedia.