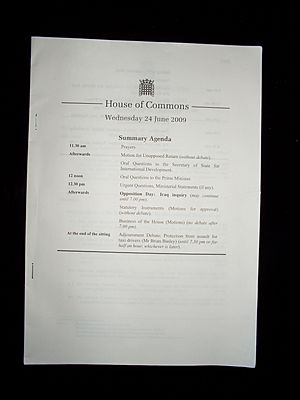 Prime Minister's Questions (PMQs) is a weekly event in the British Parliament. It is a chance for the Leader of the Opposition and other Members of Parliament to ask the Prime Minister questions. Until 1997 there were two short PMQs each week. Now there is one longer event, which is on a Wednesday. It can often be a loud and rowdy event with lots of MPs shouting. Once Michael Heseltine grabbed the mace and waved it around his head.

All content from Kiddle encyclopedia articles (including the article images and facts) can be freely used under Attribution-ShareAlike license, unless stated otherwise. Cite this article:
Prime Minister's Questions Facts for Kids. Kiddle Encyclopedia.