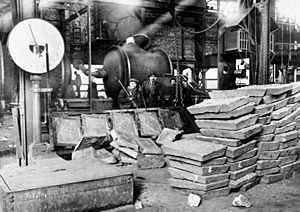 Copper ingots in a factory

An ingot is a material, usually metal, that is cast into a shape suitable for further processing. It requires a second procedure of shaping, by means of cold/hot working to produce the final product. They involve relatively simple procedures. However, this only works for simple objects, such as shaping a bar ingot into a mallet tip.

Metal heated past its melting point and molded into a bar or block. Additionally, the molds from which metal objects are cast may be called ingots. After the ingots are created they are sold in that form mainly to industries to be melted into another form.

In the semiconductor industry single crystal ingots (often called boules) of semiconductor materials can be grown'. These are then cut up and polished to provide wafers on which semiconductor devices, ranging from microprocessors to light-emitting diodes can be fabricated.

All content from Kiddle encyclopedia articles (including the article images and facts) can be freely used under Attribution-ShareAlike license, unless stated otherwise. Cite this article:
Ingot Facts for Kids. Kiddle Encyclopedia.