Spong Hill is an Anglo-Saxon cemetery site located at North Elmham in Norfolk, England. It is the largest Early Anglo-Saxon burial site ever excavated. The site at Spong Hill consisted of two cemeteries, a large cremation cemetery and a smaller, 6th century cemetery of 57 inhumations. Several of the inhumation graves were covered by small barrows and others were marked by the use of coffins.

Extensive excavations of the Early Saxon cemetery and part of the associated settlement revealed evidence of Early Prehistoric occupation on the hill top, dating from the Mesolithic to the Early Bronze Age. Excavation of the Anglo-Saxon cemetery also revealed extensive occupation evidence: late Iron Age and Roman enclosures and field boundaries, an early Roman kiln, and a small settlement of 'sunken huts' and post-hole buildings possibly contemporary with the cemetery.

Spong Hill contains within it 2259 cremations and 57 inhumations. It was in use for around 150 years during which time from 2,500 to 3,000 individuals were buried. This implies it served a population of around 750 people. This is much larger than a single contemporary settlement which suggests the cemetery served a number of local communities.

There had been a number of finds of cremation urns, the first being reported in 1711. There was a small scale excavation in the 1950s and a further investigation in 1968. The full scale excavation between 1972 and 1981 was directed by Dr Catherine Hills and funded by the Department of the Environment. 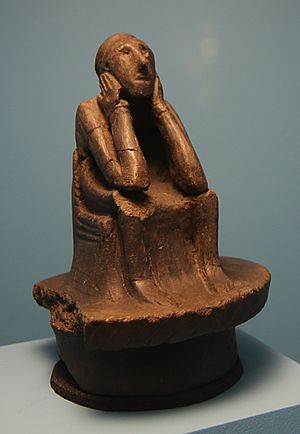 "Spong Man" is a pottery lid of a cremation urn in the shape of a seated figure. Unearthed in 1979, it is unique in Early Saxon archaeology, being the earliest Anglo-Saxon three-dimensional human figure that has ever been found. The lid is about 14 centimetres in height.

Spong Man was loaned to the "Anglo-Saxon Kingdoms: Art, Word, War" exhibition at the British Library in 2018/9.

Three 5th century cremation urns from the Spong Hill site bear the impression of the debated term alu by "the same runic stamp" in mirror-runes.

All content from Kiddle encyclopedia articles (including the article images and facts) can be freely used under Attribution-ShareAlike license, unless stated otherwise. Cite this article:
Spong Hill Facts for Kids. Kiddle Encyclopedia.