Norwich Castle is a medieval royal fortification in the city of Norwich, in the English county of Norfolk. It was founded in the aftermath of the Norman conquest of England when William the Conqueror (1066–1087) ordered its construction because he wished to have a fortified place in the important city of Norwich. It proved to be his only castle in East Anglia. It is one of the Norwich 12 heritage sites. In 1894 the 'Norwich Museum' moved to Norwich Castle and it has been a museum ever since. It is now known as Norwich Castle Museum & Art Gallery, and holds significant objects from the region, especially archaeological finds and natural history specimens.

Norwich is one of 48 castles mentioned in the Domesday Survey of 1086. Building a castle in a pre-existing settlement could require demolishing properties on the site. At Norwich, estimates vary that between 17 and 113 houses occupied the site of the castle. Excavations in the late 1970s discovered that the castle bailey was built over a Saxon cemetery. Historian Robert Liddiard remarks that "to glance at the urban landscape of Norwich, Durham or Lincoln is to be forcibly reminded of the impact of the Norman invasion". Until the construction of Orford Castle in the mid-12th century under Henry II, Norwich was the only major royal castle in East Anglia. 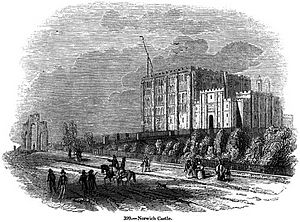 The stone keep, which still stands today, was probably built between 1095 and 1110. In about the year 1100, the motte was made higher and the surrounding ditch deepened. During the Revolt of 1173–1174, in which Henry II's sons rebelled against him and started a civil war, Norwich Castle was put in a state of readiness. Hugh Bigod, 1st Earl of Norfolk was one of the more powerful earls who joined the revolt against Henry. With 318 Flemish soldiers that landed in England in May 1174, and 500 of his own men, Bigod advanced on Norwich Castle. They captured the castle and took fourteen prisoners who were held for ransom. When peace was restored later that year, Norwich was returned to royal control.

The Normans introduced the Jews to Norwich and they lived close to the castle. A cult was founded in Norwich in the wake of the murder of a young boy, William of Norwich, for which the Jews of the town were blamed. In Lent 1190, violence against Jews erupted in East Anglia and on 6 February (Shrove Tuesday) it spread to Norwich. Some fled to the safety of the castle, but those who did not were killed. The Pipe Rolls, records of royal expenditure, note that repairs were carried out at the castle in 1156–1158 and 1204–1205.

The castle was used as a gaol from 1220, with additional buildings constructed on the top of the motte next to the keep. These buildings were demolished and rebuilt between 1789 and 1793 by Sir John Soane, and more alterations were made in 1820. The use of the castle as a gaol ended in 1887, when it was bought by the city of Norwich to be used as a museum. The conversion was undertaken by Edward Boardman, and the museum opened in 1895.

The forebuilding attached to the keep was pulled down in 1825. Although the keep remains, its outer shell has been repaired repeatedly, most recently in 1835–9 by Anthony Salvin, with James Watson as mason using Bath stone. None of the inner or outer bailey buildings survive, and the original Norman bridge over the inner ditch was replaced in about the year 1825. During the renovation, the keep was completely refaced based faithfully on the original ornamentation. 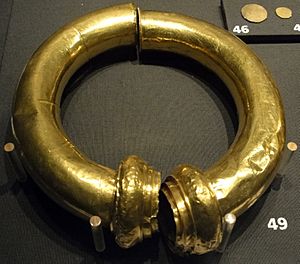 Part of the Snettisham Hoard on display in the museum.

The castle remains a museum and art gallery today and still contains many of its first exhibits, as well as many more recent ones. Two galleries feature the museum's decorative art collections, including costume, textiles, jewellery, glass, ceramics and silverware, and a large display of ceramic teapots. Other gallery themes include Anglo-Saxons (including the Harford Farm Brooch ) and Vikings, Queen Boudica and the Iceni tribe, Ancient Egypt, and natural history. 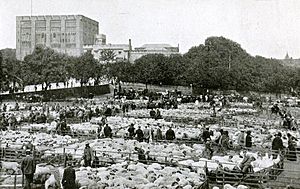 The fine art galleries include works from the 17th to 20th centuries, and include English watercolour paintings, Dutch landscapes and modern British paintings. The Castle also houses a good collection of the work of the Flemish artist Peter Tillemans. Two galleries feature changing exhibits of modern art, history and culture.

Norwich Castle is a Scheduled Ancient Monument and Grade I listed building. Visitors can tour the castle keep and learn about the castle through interactive displays. Separate tours are also available of the dungeon and the battlements. Although not permanently on display, one of the largest collections it holds is the butterfly collection of Margaret Fountaine. An unusual artefact is the needlework done by Lorina Bulwer at the turn of the twentieth century whilst she was confined in a workhouse. The work has featured on the BBC.

G. T. Clark, a 19th-century antiquary and engineer, described Norwich's great tower as "the most highly ornamented keep in England". It was faced with Caen stone over a flint core. The keep is some 95 ft (29 m) by 90 ft (27 m) and 70 ft (21 m) high, and is of the hall-keep type, entered at first floor level through an external structure called the Bigod Tower. The exterior is decorated with blank arcading. Castle Rising is the only other comparable keep in this respect. Internally, the keep has been gutted so that nothing remains of its medieval layout. The uncertainty surrounding the keep's arrangement has led to scholarly debate. What is agreed on is that it had a complex domestic arrangement, with a kitchen, chapel, a two-storey high hall, and 16 latrines.

All content from Kiddle encyclopedia articles (including the article images and facts) can be freely used under Attribution-ShareAlike license, unless stated otherwise. Cite this article:
Norwich Castle Facts for Kids. Kiddle Encyclopedia.