Norwich City Hall is an Art Deco building completed in 1938 which houses the city hall for the city of Norwich, East Anglia, in Eastern England. It is one of the Norwich 12, a collection of twelve heritage buildings in Norwich deemed of particular historical and cultural importance. It is Grade II* listed.

Norwich City Hall was opened in 1938 by King George VI and Queen Elizabeth the Queen Mother. It had been designed by architects Charles Holloway James and Stephen Rowland Pierce, after Robert Atkinson had prepared a layout for the whole Civic Centre site at the request of Norwich Corporation (now the City Council). A competition took place in 1931 which attracted 143 entries, with Atkinson as the sole judge. After the winning design was chosen the Depression and a protracted planning process delayed the start of the building, and the foundation stone was not laid until 1936. Norwich City Hall was officially opened by the King and Queen on 29 October 1938 and a huge crowd turned out to celebrate. Less than a year later the Second World War broke out and Norwich was extensively bombed, but the building survived intact. The austerity that followed the war ensured no project of similar quality could be contemplated. Today, Norwich City Hall stands as an exemplary building of its period, completed to the highest standards of architectural integrity and individual craftsmanship. 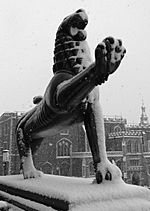 One of the two heraldic lions which flank the entrance, designed by Alfred Hardiman.

The architects designed for Norwich an Art Deco public building of national significance. It was built to the highest standards, using superior materials and methods of its day. Even the bricks were specially made, each one being two inches longer than usual to better reflect the proportions of the finished building. Charles Holloway James and Stephen Rowland Pierce engaged Alfred Hardiman as their consultant sculptor. He contributed the iconic lions passant which guard the building, and three figures of Recreation, Wisdom and Education for the Council Chamber. His colleague James Woodford designed the six main bronze doors, incorporating 18 roundels showing the history and industry of Norwich. Eric Aumonier carved the city arms above the Regalia Room window on Bethel Street, and Margaret Calkin James provided textiles for some of the important rooms.

Over the years many Art Deco buildings have lost their hallmark fixtures and fittings, but Norwich retains many of its original features. This is particularly fortunate as the furniture, light fittings and other details throughout the building were designed by the architects themselves.

The materials used include Italian marble and English stone, Honduras mahogany and Australian walnut. Seating is upholstered in Moroccan leather, and rooms panelled in elm, oak, teak and birch. The Lord Mayor’s octagonal parlour is panelled in sycamore with French walnut trim, with the door finished in English walnut. The main frontage of the building is 280 feet long, incorporating a 365ft balcony.

All content from Kiddle encyclopedia articles (including the article images and facts) can be freely used under Attribution-ShareAlike license, unless stated otherwise. Cite this article:
City Hall, Norwich Facts for Kids. Kiddle Encyclopedia.