Kett's Rebellion was a revolt in Norfolk, England during the reign of Edward VI, largely in response to the enclosure of land. It began at Wymondham on 8 July 1549 with a group of rebels destroying fences that had been put up by wealthy landowners. One of their targets was yeoman farmer Robert Kett who, instead of resisting the rebels, agreed to their demands and offered to lead them.

Kett and his forces, joined by recruits from Norwich and the surrounding countryside and numbering some 16,000, set up camp on Mousehold Heath to the north-east of the city on 12 July. The rebels stormed Norwich on 29 July and took the city. On the 1st of August the rebels defeated a Royal Army led by the Marquess of Northampton who had been sent by the government to suppress the uprising.

Kett's rebellion ended on 27 August when the rebels were defeated by an army under the leadership of the Earl of Warwick at the Battle of Dussindale. Kett was captured, held in the Tower of London, tried for treason, and hung on 7 December 1549. 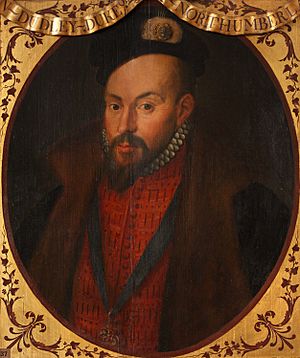 The Earl of Warwick led the force that defeated the rebels

The 1540s saw a crisis in agriculture in England. With the majority of the population depending on the land, this led to outbreaks of unrest across the country. Kett's rebellion in Norfolk was the most serious of these. The main grievance of the rioters was enclosure, the fencing of common land by landlords for their own use. Enclosure left peasants with nowhere to graze their animals. 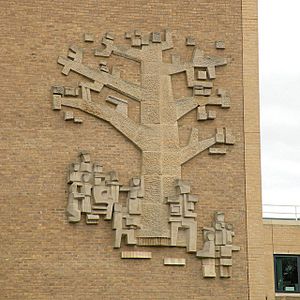 The Oak of Reformation on Kett House, an office block in Station Road, Cambridge

Some landowners were forcing tenants off their farms so that they could engross their holdings and convert arable land into pasture for sheep, which had become more profitable as demand for wool increased. Inflation, unemployment, rising rents and declining wages added to the hardships faced by the common people.

The rebellion is remembered in the names of schools, streets, pubs and a walking route in the Norwich and Wymondham area. Kett's rebellion has featured in many novels. In 1988 British composer Malcolm Arnold produced the Robert Kett Overture (Opus 141), inspired by the rebellion.

All content from Kiddle encyclopedia articles (including the article images and facts) can be freely used under Attribution-ShareAlike license, unless stated otherwise. Cite this article:
Kett's Rebellion Facts for Kids. Kiddle Encyclopedia.