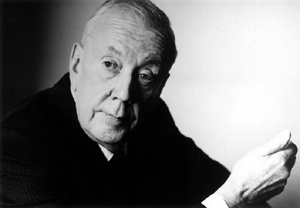 Sir Malcolm Arnold (born Northampton, 21 Oct 1921; died 23 September 2006) was an English composer. He is famous for writing symphonies, concertos and movie music. People disagree about whether he is one of the really great composers, or just a very skilled musician. His music is often very tuneful, sometimes it is sentimental. He could write music very quickly. His famous music for the movie The Bridge on the River Kwai was composed in ten days.

In 1938 Malcolm Arnold went to the Royal College of Music to study composition with Gordon Jacob. He started his career as a trumpeter with the London Philharmonic Orchestra, later becoming principal trumpet. By the late 1940s he was concentrating on his composing career.

Arnold was composing at a time when many composers were writing music which was quite atonal which made it hard to understand, but Arnold’s music is tonal and there are many tunes which are easy to remember. He wrote nine symphonies and several concertos for different instruments, even unusual instruments like the harmonica. Some of his best orchestral works are the set of dances: English Dances , Scottish Dances and Cornish Dances . He also wrote 2 operas, 7 ballets and 2 string quartets. His overture Tam O'Shanter is very exciting. It tells in music the story in the poem by Robert Burns.

Arnold wrote music for 132 films. The most famous is The Bridge on the River Kwai (1957) for which he won an Oscar. He was the first British composer ever to have won this award. This movie includes the famous Colonel Bogey March. This march had been written many years earlier by Kenneth J. Alford, but Arnold composed a countermelody to it. His original music for the movie includes the famous River Kwai March (this is not the same as the Colonel Bogey March). Other movies for which he wrote music include The Belles of St Trinian's (1954), The Inn of the Sixth Happiness (1958) and Whistle Down the Wind (1961).

Youth orchestras and amateur orchestras enjoy playing his works because they are an exciting mixture of classical, jazz, popular and folk music, and are not too difficult to play.

All content from Kiddle encyclopedia articles (including the article images and facts) can be freely used under Attribution-ShareAlike license, unless stated otherwise. Cite this article:
Malcolm Arnold Facts for Kids. Kiddle Encyclopedia.