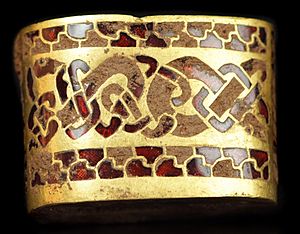 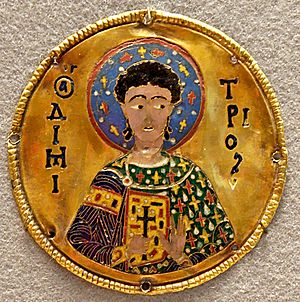 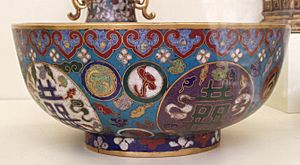 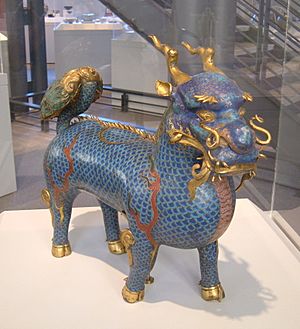 Cloisonné, a French word meaning "enclosed", is a metal-working technique. It is an ancient technique for decorating metalwork objects. The resulting objects can also be called cloisonné.

The decoration is formed by first adding compartments or cells to the metal object. This is done by soldering or sticking silver or gold wires or thin strips placed on edge. These are visible in the finished piece, separating the different compartments.

Coloured enamel is the usual filling for the cells. Cloisonné enamel objects are worked on with enamel powder made into a paste, which then is fired in a kiln. In older times inlays of cut gemstones were often used.

The technique was in ancient times mostly used for jewellery and small fittings for clothes, weapons or similar small objects. They were decorated with geometric or schematic designs, with thick cloison walls. In the Byzantine Empire a technique with thinner wires were developed. This let pictorial images to be made. It was mostly used for religious images and jewellery, and by then always using enamel. By the 14th century this enamel technique had spread to China, where it was soon used for much larger vessels such as bowls and vases. The technique is common in China to the present day. Cloisonné enamel objects using Chinese-derived styles were produced in the West from the 18th century.

All content from Kiddle encyclopedia articles (including the article images and facts) can be freely used under Attribution-ShareAlike license, unless stated otherwise. Cite this article:
Cloisonné Facts for Kids. Kiddle Encyclopedia.