The KNVB Beker is a competition in the Netherlands organized by the Royal Dutch Football Association (KNVB) since 1898. It was based on the format of the English FA Cup. Outside the Netherlands, it is often referred to as the Dutch Cup. The tournament consists of all teams from the top three tiers of Dutch league football (Eredivisie, Eerste Divisie and Topklasse), as well as the 24 semi-finalists (or replacements) of regional amateur cup tournaments.

The finals of the tournament traditionally takes place in De Kuip, and has been held there every season since 1988. The winners of the cup compete against the winners of the Eredivisie for the Johan Cruijff Shield, which acts as the curtain raiser for the following season. 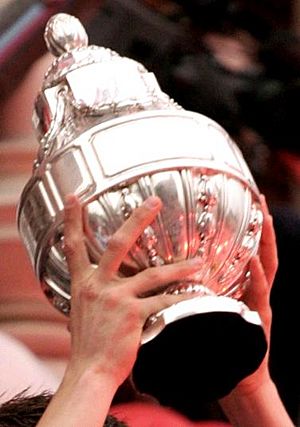 The competition was conceived during a board meeting of the Dutch National Football Association, in the Hague, on 19 January 1898. The tournament began the following season, 1898–1899. The first final was played on 9 May 1899 between RAP Amsterdam and HVV Den Haag. In 1946, the trophy was changed to one made out of silver, which was extremely rare in the immediate aftermath of World War II.

Like many national cup competitions, the name of the tournament has changed with sponsorship. From 1995, the competition went from being the KNVB Cup Tournament to being known as the Amstel Cup after the then sponsor Amstel. On 16 August 2005, the name was changed to the Gatorade Cup after the drinks company Gatorade. In 2006, the name returned to being the KNVB Cup Tournament with Gatorade remaining as the principal sponsor.

All content from Kiddle encyclopedia articles (including the article images and facts) can be freely used under Attribution-ShareAlike license, unless stated otherwise. Cite this article:
KNVB Cup Facts for Kids. Kiddle Encyclopedia.