Adam Maher (born 20 July 1993) is a Dutch professional footballer who plays for FC Utrecht as a midfielder. 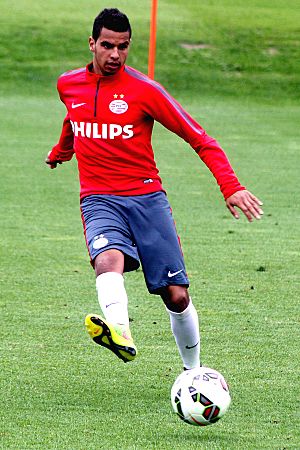 Maher training with PSV in 2014

Maher made his professional debut for AZ on 15 December 2010 in a 2010–11 UEFA Europa League game against FC BATE Borisov and scored a goal on his debut. He was the youngest player playing for a Dutch football club ever to score a goal in the Europa League and UEFA Cup. When AZ won the 2013 KNVB Cup Final Maher scored the first goal as they defeated PSV Eindhoven 2-1.

Maher was a member of the Netherlands squad for the 2009 FIFA U-17 World Cup. In February 2012 Adam Maher was called at the preselection of the Dutch team by Bert van Marwijk. On 7 May 2012, he was named in the provisional list of 36 players for the Euro 2012 tournament, one of nine uncapped players to be chosen by Netherlands manager Bert van Marwijk as part of the preliminary squad, but eventually did not make the final cut. He made his debut for the Netherlands in a friendly match against Bayern Munich. On 15 August 2012, Maher earned his first official cap under new manager Louis van Gaal in the 4–2 loss against Belgium in a friendly match.

All content from Kiddle encyclopedia articles (including the article images and facts) can be freely used under Attribution-ShareAlike license, unless stated otherwise. Cite this article:
Adam Maher Facts for Kids. Kiddle Encyclopedia.