Port of Belfast facts for kids 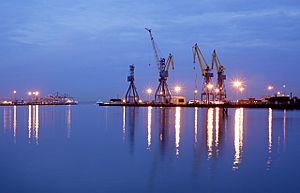 The Belfast Harbour Estate is home to many well-known Northern Ireland businesses such as George Best Belfast City Airport, Harland and Wolff, Bombardier Aerospace, Odyssey, the Catalyst Inc, Titanic Quarter and Titanic Belfast. Over 700 firms employing 23,000 people are located within the estate.

Belfast is only one of two ports on the island of Ireland to handle a full range of cargoes, from freight vehicles to containers, dry, break and liquid bulk, as well as passenger services and cruise calls.

Belfast Harbour handled 23 million tonnes of cargo during 2015, similar to its throughput for 2014. The tonnages suggest a varying performance between sectors in the wider Northern Ireland economy.

Panorama of the Titanic Quarter, showing the remaining Harland and Wolff buildings, the Samson and Goliath cranes and the Odyssey.

All content from Kiddle encyclopedia articles (including the article images and facts) can be freely used under Attribution-ShareAlike license, unless stated otherwise. Cite this article:
Port of Belfast Facts for Kids. Kiddle Encyclopedia.