Greenisland is a town in County Antrim, Northern Ireland. It lies 7 miles north-east of Belfast and 3 miles south-west of Carrickfergus. The town is on the coast of Belfast Lough and is named after a tiny islet to the west, the Green Island.

It is a semi-rural community located at the foot of Carn Hill , upon which stands the Knockagh Monument, a war memorial for those from County Antrim who died in the first and second world wars.

Originally, the area now known as Greenisland was merely an unnamed area of the town of Carrickfergus with the Silverstream river, now the western boundary of Greenisland, marking the westernmost boundary of the large town. Today, roadsigns indicate that the river, which now flows through the grounds of Belfast High School, is the exact boundary between the Carrickfergus and Newtownabbey boroughs. From 1602 to 1606 the "freemen", leading citizens of Carrickfergus, obtained the right to redistribute this area of land from the Crown, renaming the area the West Division - a name which remains legal today.

Farmland was distributed in strips from Knockagh Hill, to the shore of Belfast Lough and lanes were constructed to provide access to the farms and their houses, including important residences such as Castle Lugg. The most notable of these was Longfield Lane, which was eventually widened and surfaced to provide access to the railway station, becoming the Station Road. Many of the lanes also remain in their original narrow state, such as Neill's Lane and Windfield Lane both of which run north from the Shore Road on either side of Greenisland.

In the 1800s, following the growth of Belfast towards the end of the 18th century, several bathing lodges used for summer recreation were established in the area. One such lodge is still standing today and has been transformed into "Ravenhill Nursing Home" by the Northern Health and Social Care Trust. During this period, Bassett's directory of 1888 notes that the area was "devoted entirely to handsome residences occupied for the greater part by gentlemen engaged in commercial and professional pursuits in Belfast".

The Belfast-to-Ballymena railway line was opened in 1845, which travelled through the area, providing one of the first transport links to the village from both Belfast and Carrickfergus. The village was finally given the official name of Greenisland in 1893 when the Greenisland railway station was constructed in its present site. Improvements in transport and a growth in prosperity led to more semi-detached and terraced houses in the area immediately surrounding the railway station.

In 1859, the Christian Revival that swept Ulster arrived in Greenisland and an open-air service was held in the field below Longfield Farm (now known locally as Johnstone Farm) which is still standing on the Station Road. By 1860 the interdenominational Ebenezer Hall was built for worshippers on the Shore Road. This was then followed in 1912 when the Presbyterian Knockagh Hall was built on the Upper Road. Neither of these buildings survive, but the congregations of these two churches remain. With Greenisland Ebenezer Church of the Nazarene now in Longfield Gardens and Greenisland Presbyterian Church on the Upper Road. Over the years they have been joined by several other churches as Greenisland has grown.

Greenisland Primary School replaced a school in Trooperslane in 1938, when it was realised that children had to walk two miles to Trooperslane and back every day. On the opening day, pupils arrived at the Trooperslane school and then walked to the new school carrying armfuls of books, jars of ink and other learning materials.

During World War II, the new school's headmaster, as an Army reservist, was called into action. Soon after, an air-raid shelter was built in the playground and gas masks were placed under desks, where the pupils would store their bags. Village residents formed a Home Guard and Civil Defence Post and air-raid drills became regular free 'entertainment' in the evenings. Stirrup pumps were issued to put out fires and proved very useful for watering gardens during the summer. The name on the outside of the school was covered during the war so that any German parachutists landing in Greenisland would be disorientated, not knowing where they were.

In Easter 1941, when a German plane was reported to have flown up the Lough towards Belfast, the anti-aircraft battery on Neill's Lane opened fire. It was the only occasion during the war that necessitated the air-raid shelters in Greenisland. The guns did not bring down any aircraft and only managed to crack some windows in the village. However, it was soon realised that a full-scale attack had been waged on the city of Belfast (today known as the Belfast Blitz, the greatest loss of life outside London during the blitz) and the village's Air Raid Precautions volunteers disappeared into Belfast for several days to help with the recovery.

A snapshot of life in Greenisland in 1986 can be found by visiting BBC Domesday Reloaded website here. 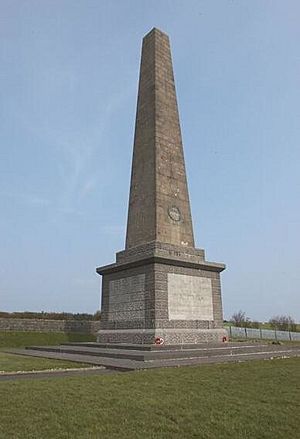 The Knockagh Monument, which overlooks Greenisland

The vast majority of Ulsterbus Belfast and Carrickfergus/Whitehead bus services take a ten-minute detour into the Greenisland estate before continuing to their destination, providing the village with frequent transport links in each direction.

Greenisland is a small settlement within Belfast Metropolitan Urban Area (BMUA). On Census day (29 April 2001) there were 5,050 people living in Greenisland. Of these:

Widening of A2 Shore Road

There have been multiple attempts and campaigns since the 1970s for the A2 Shore Road bottleneck to be removed and a dual carriageway to be built. Each made varying amounts of progress with plans and purchasing of property but were later abandoned for various reasons.

Proposals began to re-emerge around 2005 for the introduction of a new multimillion-pound dual carriageway along the A2 Shore Road. In preparation for this, public consultations were conducted and relevant properties purchased. Conor Murphy the then Regional Development Minister stated in June 2010 that subject to "finances being available, delivery is expected to start in 2011-12, and the project should be completed in 2013". This was then further delayed until finances could be found.

On 14 February 2012 it was confirmed in a press conference at Stormont by Edwin Poots, Martin McGuinness, Peter Robinson and Danny Kennedy that "£57m (would) be spent on improving the A2 Carrickfergus to Belfast road."

All content from Kiddle encyclopedia articles (including the article images and facts) can be freely used under Attribution-ShareAlike license, unless stated otherwise. Cite this article:
Greenisland Facts for Kids. Kiddle Encyclopedia.