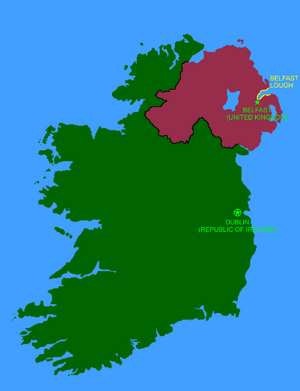 The island of Ireland, with the Republic of Ireland in green, Northern Ireland (UK) in magenta, and Belfast Lough in yellow. 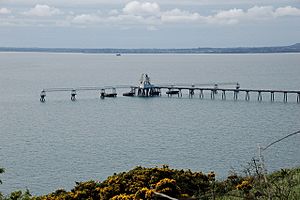 The jetty at Cloghan Point is used to off-load oil from tankers, for use at the nearby Kilroot power station. 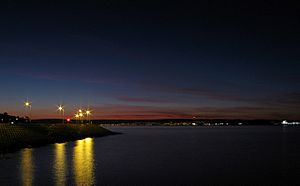 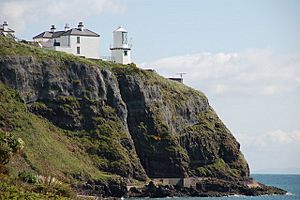 Blackhead Lighthouse is one of three lighthouses in Belfast Lough.

Belfast Lough is a large, intertidal sea inlet on the east coast of Northern Ireland. At its head is the city and port of Belfast, which sits at the mouth of the River Lagan. The lough opens into the North Channel and connects Belfast to the Irish Sea.

Belfast Lough is a long, wide and deep expanse of water, virtually free of strong tides. The inner part of the lough comprises a series of mudflats and lagoons. The outer lough is restricted to mainly rocky shores with some small sandy bays. The outer boundary of the lough is a line joining Orlock Point and Blackhead.

Belfast Lough is known in Irish as Loch Lao, which was Anglicised as 'Lough Lee'. Earlier spellings include Loch Laoigh and Loch Laigh. This name means "sea inlet of the calf". The River Lagan, which flows into it, was also historically known as the Lao. It is believed that the lough and river were named after a "bovine goddess". In the 2nd century, the Greek geographer Ptolemy referred to it as the Logia.

Before Belfast grew into a city, the lough was known in English as 'Carrickfergus Bay'. In Ulster-Scots it is called Bilfawst Loch or Craigfergus Loch.

In 1689 during the War of the Two Kings the Williamite expeditionary force under Marshal Schomberg landed at Bangor, after the lough had been cleared of French shipping by George Rooke. Schomberg occupied the towns of Bangor and Belfast, before successfully laying siege to Carrickfergus. The following year William III also used the lough as a safe anchorage when he arrived in Ireland with reinforcements for Schomberg in the run-up to the victory over the Jacobite army at the Battle of the Boyne.

The reserve is situated within the Belfast Harbour Estate on the shores of Belfast Lough. The RSPB manages some mudflats in Belfast Lough, together with an area of grassland with a pool and ditch complex near Belfast City Airport, and a lagoon with a hide and viewpoints. The mudflats are important feeding areas for a variety of wading birds and wildfowl. At high tide, flocks of wading birds, such as redshank, oystercatchers and black-tailed godwits, can be seen from the hide and viewing points. The "inner lough" was made an Area of Special Scientific Interest (ASSI) in 1987.

The Belfast Lough Ramsar site (wetlands of international importance designated under the Ramsar Convention), is 432.14 hectares in area, at latitude 54 38 00 N and longitude 05 54 00 W. It was designated a Ramsar site on 5 August 1998. The site contains the inner part of the lough including areas of intertidal foreshore, consisting of mudflats and lagoons, and land, both reclaimed and being reclaimed, which form important feeding/roosting sites for significant numbers of wintering waders and wildfowl. The outer lough is restricted to mainly rocky shores with some small sandy bays and beach-head salt marsh.

Popular for sailing, the lough has three marinas: one at Bangor, one at Carrickfegus and a third located at Titanic Quarter. Belfast docks at the head of a lough contain the famous shipbuilder of the RMS Titanic fame, Harland & Wolff, who are no longer building ships for the foreseeable future and has shed most of its workforce and diversified into repairing and refitting large tankers and oilrigs. Coastguard offices for the lough, although referred to as Belfast Coastguard, are in the town of Bangor by the marina. In 1912, the RMS Titanic sailed down the lough from Belfast to the Irish Sea for its sea trials.

For racing sailors, this is a competitor's dream, giving 30 square miles (78 km2) of open water and enough coastline to make short inshore races day-long affairs. Three main arteries serve the lough close to Belfast: the Herdman Channel on the County Antrim coast side; the Victoria Channel, the central and longest route; and the Musgrave Channel on the County Down side.

The Belfast-Larne railway line skirts the north shore particularly from Carrickfergus and then Downshire to Whitehead and northwards then alongside Larne Lough to Larne Harbour. Trains connect Belfast Great Victoria Street and Belfast Central to Larne Harbour.

Cultra railway station is the home of the Ulster Folk and Transport Museum.

All content from Kiddle encyclopedia articles (including the article images and facts) can be freely used under Attribution-ShareAlike license, unless stated otherwise. Cite this article:
Belfast Lough Facts for Kids. Kiddle Encyclopedia.