Holywood (/ˈhɒliwʊd/ HOL-ee-wuud) is a town in the metropolitan area of Belfast in County Down, Northern Ireland. It is a civil parish and townland of 755 acres lying on the shore of Belfast Lough, between Belfast and Bangor. Holywood Exchange and Belfast City Airport are nearby. The town hosts an annual jazz and blues festival.

The English name Holywood comes from Latin Sanctus Boscus, meaning 'holy wood'. This was the name the Normans gave to the woodland surrounding the monastery of St Laiseran, son of Nasca. The monastery was founded by Laiseran before 640 and was on the site of the present Holywood Priory. The earliest Anglicized form appears as Haliwode in a 14th-century document. Today, the name is pronounced the same as Hollywood.

In the 17th century, Ulster ports began to rise in prominence. In 1625, William Pitt was appointed as Customer of the ports of Newcastle, Dundrum, Killough, Portaferry, Donaghadee, Bangor and Holywood.

In the early 19th century, Holywood, like many other coastal villages throughout Ireland, became popular as a resort for sea-bathing. Many wealthy Belfast merchants chose the town and the surrounding area to build large homes for themselves. These included the Kennedys of Cultra and the Harrisons of Holywood. Dalchoolin House stood on the site of the present Ulster Transport Museum, while Cultra Manor was built between 1902–04 and now houses part of the Ulster Folk and Transport Museum.

The railway line from Belfast to Holywood opened in 1848, and this led to rapid development. The population of Holywood was approximately 3,500 in 1900 and had grown to 12,000 by 2001. This growth, coupled with that of other towns and villages along the coastal strip to Bangor, necessitated the construction of the Holywood Bypass in the early 1970s. Holywood today is a popular residential area and is well known for its fashionable shops, boutiques, arts and crafts. 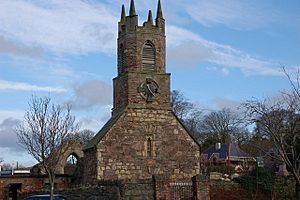 The Old Priory ruins lie at the bottom of the High Street. The tower dates from 1800, but the oldest ruins date from the early 13th century. The Priory graveyard is the resting place for many distinguished citizens including the educational reformer, Dr Robert Sullivan, and the Praeger family. Robert Lloyd Praeger (1865–1953) was an internationally renowned botanist and his sister, Rosamond Praeger (1867–1954), gained fame as a sculptor and writer. "Johnny the Jig", one of her sculptures, is situated in the town. Praeger House at Sullivan Upper Grammar School is named after the family. Bishop Robert Bent Knox is also buried there.

Holywood Urban Area is a medium town within the Belfast Metropolitan Urban Area (BMUA) as classified by the Northern Ireland Statistics and Research Agency (i.e. with population between 10,000 and 18,000 people). On Census day (29 April 2001) there were 12,037 people living in Holywood. Of these: 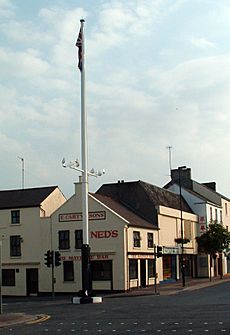 The Maypole and Ned's Bar

The first section of the Belfast and County Down Railway (BCDR) line from Belfast to Holywood, along with Holywood railway station, opened on 2 August 1848. The line was extended to Bangor by the Belfast, Holywood and Bangor Railway (BHBR), opening on 1 May 1865, and acquired by the BCDR in 1884. Holywood station was closed for goods traffic on 24 April 1950.

All content from Kiddle encyclopedia articles (including the article images and facts) can be freely used under Attribution-ShareAlike license, unless stated otherwise. Cite this article:
Holywood Facts for Kids. Kiddle Encyclopedia.