Two of Belfast's three main newspapers - The Belfast Telegraph and The Irish News are also located nearby. The News Letter, which claims to be the oldest continually published English language daily newspaper still in existence, was originally located in the area at 55 Donegall Street, site of a massive Provisional IRA carbomb in March 1972, in which seven people died and 148 were injured. 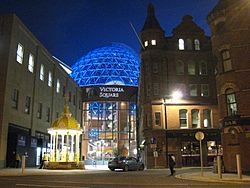 The Gasworks Business Park is owned by Belfast City Council and managed by the Councils Estates Management Unit. The site contains commercial offices, call centres, small business units, housing, cafés & restaurants, the Radisson Hotel and an award winning public landscaped park. The Gasworks has been internationally recognised as a key example of brownfield regeneration in Europe and has won numerous awards in relation to all aspects of its development. The initial phase is now almost complete and the City Council are currently preparing a master plan in preparation for the commencement of Phase II development.

Victoria Square is a commercial, residential and leisure development in Belfast developed and built by Multi Development UK UK over 6 years. At approx 800,000 ft² (75,000m²) and costing £400m it is the biggest and one of the most expensive property developments ever undertaken in Northern Ireland. It opened on March 6, 2008. Its anchor tenant at nearly 200,000 ft² (18,581m²) is the largest House of Fraser that the retailer has opened in the UK (as opposed to taken over).

In March 2006, the government gave the go-ahead for a £300m regeneration of a run-down part of Belfast city centre, in the Cathedral Quarter, which could create up to 2,000 jobs. Plans include a new shopping centre, anchored by a department store. The project will not be completed until 2011. It is estimated that 1,000 people will help build the development and 2,000 will be employed there. 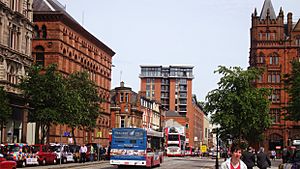 A view of Donegall Square North 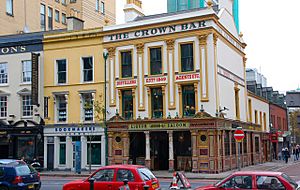 Northern Ireland Railways provide access on the Belfast Suburban Rail network with stations in proximity to the city centre.

All content from Kiddle encyclopedia articles (including the article images and facts) can be freely used under Attribution-ShareAlike license, unless stated otherwise. Cite this article:
Belfast City Centre Facts for Kids. Kiddle Encyclopedia.