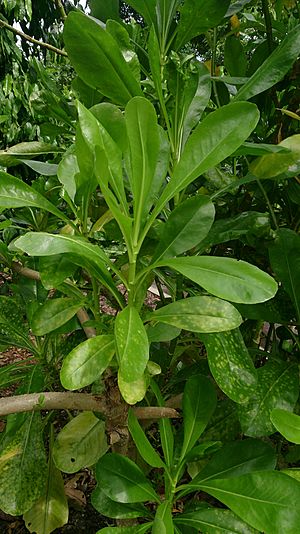 Algae (one is alga, but several is algae) are a type of plant-like living things that can make food from sunlight by photosynthesis. The study of algae is called phycology or algology.

The term lumps together many different kinds of organisms. They have in common only that they are autotrophic: they use natural sources of energy and simple inorganic materials to build their forms. As non-vascular plants they do not have the kind of cell and tissue structure of land plants. Only in recent years has it become clear how different the many kinds of algae are.

The most recent estimate suggests there are 72,500 algal species worldwide. 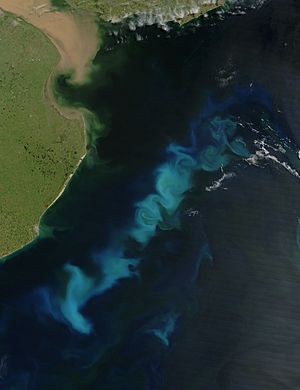 Phytoplankton bloom in the south Atlantic off Argentina

Algae are a large and diverse group of simple, typically autotrophic organisms. Some have one cell and others have many cells. The largest and most complex marine algae are called seaweeds. They are like plants, and "simple" because they lack the many distinct organs found in land plants. For that reason they are not classified as plants.

Though the prokaryotic Cyanobacteria (formerly referred to as blue-green algae) were included as "algae" in older textbooks, it is not now. The term algae is now used for eukaryotic organisms. All true algae have a nucleus within a membrane and chloroplasts inside one or more membranes.

However, algae are definitely not a monophyletic group, as they do not all descend from a common algal ancestor.

Algae do not have the same structures that land plants do, such as leaves, roots, and other organs. Nearly all algae have parts that use photosynthesis and produce oxygen. Some unicellular species use only external energy sources and have limited or no photosynthetic parts.

Fossilized algae from the Vindhya basin have been dated back to 1.6 to 1.7 billion years ago. 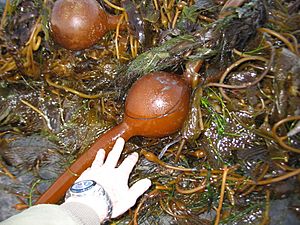 Algae are usually found in damp places or water, and are common on land and water. However, algae on land are usually inconspicuous and are far more common in moist, tropical regions than dry ones. Algae do not have vascular tissues and other adaptations to live on land, but they can endure dryness and other conditions in symbiosis with a fungus as lichen.

The various sorts of algae play significant roles in aquatic ecology. Microscopic forms that live suspended in the water column are called phytoplankton. They provide the food base for most marine food chains.

Kelp grows mostly in shallow marine waters. Some are used as human food or harvested for agar or fertilizer. Kelp can grow in large stands called kelp forests. These forests prevent some of the damage from waves. Many different species live in them, including sea urchins, sea otters, and abalone.

Some algae may harm other species. Some algae may reproduce a lot, and make an algal bloom. These algae may make protective toxins which can kill fish in the water. Dinoflagellates make a compound that turns the flesh of fish into slime. Then the algae eats this nutritious liquid. 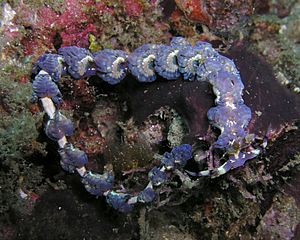 Nudibranch Pteraeolidia ianthina contains algae which photosynthesize, and provide food for the mollusc

Algae have evolved a number of symbiotic partnerships with other organisms. The most famous is the plant-like lichen, which are each formed by a fungus with an alga. It is a highly successful life-form, and twenty thousand 'species' are known.

Less well known are the algal relationships with animals. Reef-building corals are basically social Cnidarian polyps. Corals are dependent on light, because the algae are important partners, and they require light corals have evolved structures, often tree-like, which offer the algae maximum access to light.

The coral weakens the algal cell walls, and digests about 80% of the food synthesised by the algae. The corals' waste-products provide nutrients for the algae so, as with lichen, both partners gain from the association.

The algae are golden-brown flagellate algae. A curious feature of the partnership is that the coral may eject the algae in hard times, and regain them later. The ejection of the algal partner is called bleaching, because the coral loses its colour.

Other types of Cnideria, such as sea anemones and jellyfish, also contain algae. Jellyfish with algae behave so that their partners get the best light during the day, and descend to depths at night, where the water is rich in nitrates and brown with decay. 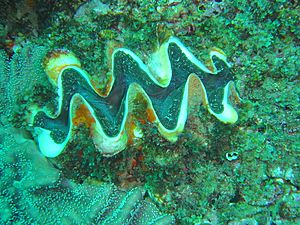 Sea slugs and clams are also well known for harbouring algae. Both groups are molluscs. The sea slugs graze on coral, and are the same colour as the coral they graze. They are able to separate the algae from the polyp tissues they digest. The algal cells are moved to its tentacles, where they continue to live. The otherwise defenceless slug gains both camouflage and nutrition.

The giant clam keeps algae in its mantle, which is revealed when the clam is open. The colored mantle has places where the skin is transparent, and acts like a lens to concentrate light on the algae beneath. When the algae get too numerous, the clam digests them.

Various other marine invertebrate groups have members which have symbiosis with algae. Flatworms (Platyhelminths) and Polychaete worms (Annelids) are two such groups. 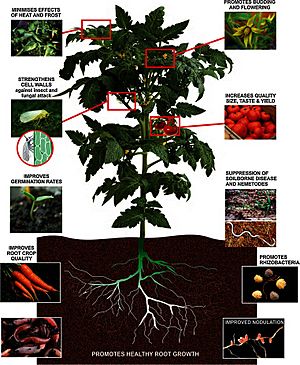 Today, algae are used by humans in many ways; for example, as fertilizers, soil conditioners, and livestock feed. Aquatic and microscopic species are cultured in clear tanks or ponds and are either harvested or used to treat effluents (liquid waste) pumped through the ponds. Algaculture on a large scale is an important type of aquaculture in some places. Maerl is commonly used as a soil conditioner.

Naturally growing seaweeds are an important source of food, especially in Asia. They provide many vitamins including: A, B1, B2, B6, niacin, and C, and are rich in iodine, potassium, iron, magnesium, and calcium.

In addition, commercially cultivated microalgae are marketed as nutritional supplements, such as spirulina, Chlorella and the vitamin-C supplement from Dunaliella, high in beta-carotene. Algae have emerged in recent years as a popular source of omega-3 fatty acids for vegetarians. Carrageenan, from the red alga Chondrus crispus, is used as a stabilizer in milk products. 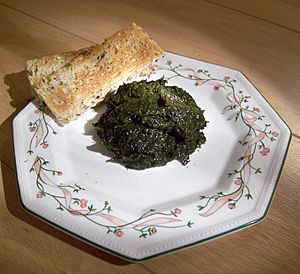 Algae are national foods of many nations: China consumes more than 70 species, including fat choy considered a vegetable; Japan has over 20 species they use such as nori and aonori. Laver is used to make "laver bread" in Wales; in Korea they use gim.

It is also used along the west coast of North America from California to British Columbia, in Hawaii and by the Māori of New Zealand. Sea lettuce and badderlocks are salad ingredients in Scotland, Ireland, Greenland, and Iceland. Algae is being considered a potential solution for world hunger problem.

Various polymers can be created from algae, which can be especially useful in the creation of bio-plastics. Several companies have begun to produce algae polymers commercially, including for use in flip-flops and in surf boards.

All content from Kiddle encyclopedia articles (including the article images and facts) can be freely used under Attribution-ShareAlike license, unless stated otherwise. Cite this article:
Algae Facts for Kids. Kiddle Encyclopedia.