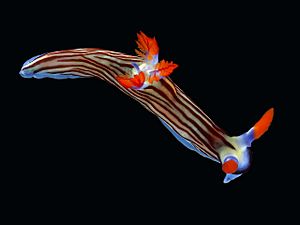 The nudibranch Nembrotha aurea is a gastropod. 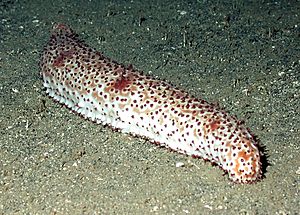 A sea cucumber also looks slug-like and is sometimes loosely called a "sea slug", but it is not a gastropod.

Sea slug is a common name for some marine invertebrates with varying levels of resemblance to terrestrial slugs. Most creatures known as sea slugs are actually gastropods, i.e. they are sea snails (marine gastropod mollusks) that over evolutionary time have either completely lost their shells, or have seemingly lost their shells due to having a greatly reduced or internal shell. The name "sea slug" is most often applied to nudibranchs, as well as to a paraphyletic set of other marine gastropods without obvious shells.

True sea slugs have enormous variation in body shape, color, and size. Most are partially translucent. The often bright colors of reef-dwelling species implies that these are under constant threat of predators, but the color can serve as a warning to other animals of the sea slug's toxic stinging cells or offensive taste. Like all gastropods, they have small razor-sharp teeth, called radulas. Most sea slugs have two pairs of tentacles on their head used primarily for sense of smell, with a small eye at the base of each tentacle. Many have feathery structures (cerata) on the back, often in a contrasting color, which act as gills. All species of genuine sea slugs have a selected prey animal on which they specialize for food, including certain jellyfish, bryozoans, sea anemones, and plankton as well as other species of sea slugs.

All content from Kiddle encyclopedia articles (including the article images and facts) can be freely used under Attribution-ShareAlike license, unless stated otherwise. Cite this article:
Sea slug Facts for Kids. Kiddle Encyclopedia.