Bryozoans, or Ectoprocta, are a phylum of small aquatic animals living in colonies. The colonies usually have a skeleton of calcium carbonate. Bryozoans have a long fossil history, starting in the Ordovician. In their life-style they resemble the polyps which form coral. Bryozoa are known informally as moss animals or sea mats. They generally like warm, tropical waters but live all over the world. There are about 5,000 living species, and 15,000 fossil species are known.

The colonies are formed by tiny (~0.2mm) members called zooids. They secrete tubes, usually of lime (CaCO3), sometimes of chitin, an organic compound. The zooids in a colony are all clones, produced by asexual reproduction. Despite this, most species produce different morphs: zooids with different functions.

All bryozoa have a lophophore. This is a ring of ten tentacles surrounding the mouth, each tentacle covered with cilia. When feeding, the zooid extends the lophophore outwards; when resting it is withdrawn into the mouth to protect it from predators. 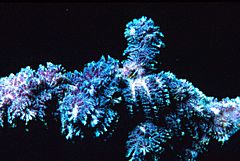 Bryozoan skeletons grow in a variety of shapes and patterns: mound-shaped, lacy fans, branching twigs, and even corkscrew-shaped. Their skeletons have many tiny openings. Each opening is the home of zooid. They have a body with a U-shaped gut, opening at the mouth and at the anus. They feed with their lophophore. The tentacles of the bryozoans are ciliated. The beating of the cilia creates a current of water which drives food (mainly phytoplankton) towards the mouth. In some groups, notably some ctenostomes, a gizzard may be formed.

Bryozoans do not have a respiratory, or a blood system, because their small size allows diffusion of gases and nutrients. However, they do have a simple nervous system, and muscles, which together can quickly take the zooid down into its shelter.

One species of bryozoan, Bugula neritina, is of interest as a source of chemicals, bryostatins, which are under investigation as anti-cancer agents.

Bryozoans can reproduce both sexually and asexually. All Bryozoans, as far as is known, are hermaphrodite (meaning they are both male and female).

All members of a colony are clones: they are genetically identical, produced by asexual reproduction. This occurs by budding off new zooids from the first zooid. So the colony grows; this is the way a colony expands in size. If a piece of a bryozoan colony breaks off, the piece can continue to grow and will form a new colony.

All zooids in a colony are linked by strands of epithelial cells. The individual members of a colony, the zooids, are in some species generalised: they feed, and they can reproduce on occasion. But in most species the zooids are specialised to diffent functions. In this case the feeding zooids are called autozooids, and the non-feeding members are called heterozooids. Functions done by heterozooids include sexual reproduction, protection, locomotion, plumbing, structural support. The functions of some heterozooids is still unknown. The commonest function is that eggs are developed in brooding chambers (ovicells) on female or hermaphrodite heterozooids. There are variations in the details: sometimes a little complex of heterozooids produce larvae in a cooperative effort.p4

Another way to describe the bryozoa which develop heterozooids is to say they are polymorphic. This term is used in biology to describe the way a genetically unified population develops into clearly distinct forms. The polymorphism is usually controlled by genetic switching mechanisms, but in bryozoa there is little knowledge of their genetics. 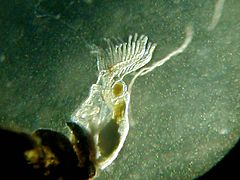 Most species of Bryozoan live in marine environments. There are about 50 species which inhabit freshwater. In their aquatic habitats, bryozoans live on all types of hard substrates: sand grains, rocks, shells, wood, blades of kelp, pipes and ships may be heavily encrusted with bryozoans. Some bryozoan colonies, however, do not grow on solid substrates, but form colonies on sediment. While some species live at depths of 8,200 m, most bryozoans live in much shallower water. Most bryozoans are sessile and immobile, but a few colonies are able to creep about, and a few species of non-colonial bryozoans live and move about in the spaces between sand grains. One remarkable species makes its living while floating in the Southern Ocean. Several bryozoan species live in the Midwestern United States, especially in Ohio, Indiana, and Kentucky which was once a part of a large ocean, the Western Interior Seaway.

Their diet consists of small microorganisms, including diatoms and other unicellular algae. In turn, bryozoans are preyed on by grazing organisms such as sea urchins and fish. 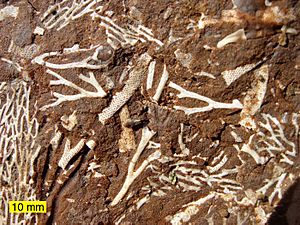 Fossil bryozoans first appear in the early Ordovician and had a huge adaptive radiation. They were abundant throughout the Palaeozoic era: they were one of the most dominant groups of Palaeozoic fossils. They were major components of seabed communities and, like modern-day bryozoans, played an important role in sediment stabilization and binding. They were food sources for many other benthic organisms. During the Lower Carboniferous (Mississippian) 354 to 323 million years ago, bryozoans were so common that their broken skeletons form entire limestone beds.

After a crash at the Permian/Triassic boundary, when almost all species went extinct, bryozoans recovered in the later Mesozoic to become as successful as before. The bryozoan fossil record has more than 15,000 species.

Most fossil bryozoans have mineralized skeletons. The skeletons of individual zooids vary from tubular to box-shaped and contain a terminal aperture from which the lophophore is protruded to feed. No pores are present in the great majority of Ordovician bryozoans, but skeletal evidence shows that epithelia were continuous from one zooid to the next.

One of the most important events during bryozoan evolution was the acquisition of a calcareous skeleton and the mechanism of tentacle protrusion. The rigidity of the outer body walls gave protection against predators, a greater degree of zooid connection, and the evolution of massive colony forms.

All content from Kiddle encyclopedia articles (including the article images and facts) can be freely used under Attribution-ShareAlike license, unless stated otherwise. Cite this article:
Bryozoa Facts for Kids. Kiddle Encyclopedia.